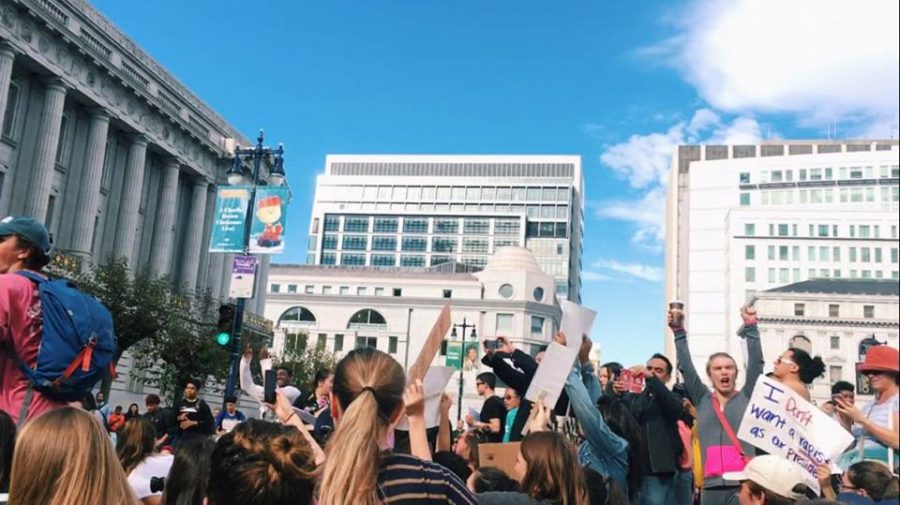 In response to the recent presidential election results, a rally organized by Palo Alto High School students to promote acceptance and equality will take place at 2:30 p.m. tomorrow at Lytton Plaza.

The rally will begin with a “peace march,” as described by a Facebook event page, in which Paly students will participate in a walkout from their Flex period at 1:50 p.m., followed by a march downtown. According to Paly junior and co-organizer Zoe Stedman, protesters will then meet up with participating students from Gunn High School, Castilleja School and Stanford University at Lytton Plaza.

Paly students plan to congregate on the Quad at 1:50 p.m. The march will officially begin at 2 p.m., and students are scheduled to reach Lytton Plaza by 2:30 p.m.

According to Paly junior and co-organizer Hana Morita, the objective of the march is to spread love and unity in the wake of a particularly controversial presidential election.

“We are demonstrating a peaceful march to show that we do not tolerate certain actions and things said during this election,” Morita said. “This is an act of unity to show compassion and respect to everyone, and also model the respect and dignity that we feel should have been modeled for us.”

Organizers emphasize that the walkout is not a protest of the president-elect Donald Trump, and that any messages of hate will not be tolerated.

“We are trying to make it clear that this is not supposed to be an anti-Trump protest,” Stedman said. “Positive, peaceful messages only.”

In line with this, organizers strongly discourage the use of any explicit signage, including that specifically targeting newly elected president Donald Trump.

In addition to keeping the content of the demonstration positive, safety remains a top priority.

“The main goal of the protest is to promote messages of love in a peaceful way,” Stedman said. “We have notified Palo Alto Police Department and Paly administration of the demonstration plans, and therefore have reassurance that the protest will remain completely peaceful.”

While administration is aware of the demonstration, students are discouraged from cutting class, and will be marked absent on their attendance record if they choose to participate, as per school policy. An email was sent out to parents by Assistant Principal Kathie Laurence reiterating this message.

“We want to make you aware that your student may participate tomorrow in a student-initiated event scheduled during school hours,” Laurence stated. “While we respect their freedom of speech and passion, we reminded them today that Flex time is instructional time, and they are supposed to be on campus.”

Students were made aware of this information earlier in the day via a Schoology message, also posted by Laurence.

“We ask that you consider staying on campus tomorrow as we are responsible for your safety,” Laurence stated.

Although the prospect of cutting Flex may deter students, Morita encourages people to come out and join the march.

“I understand that some people do not want a cut,” Morita said. “However, this is a small setback compared to people who fear for their family and do not feel safe at home. By coming out you are showing that you are committing to protecting your friends, peers and community.”