The education argument — why students should support Clinton 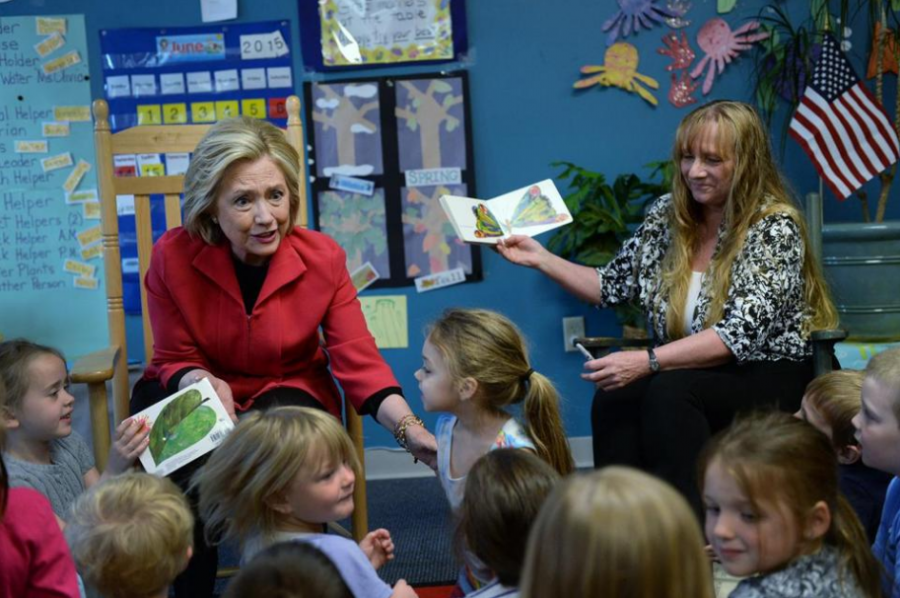 In a presidential election torn between unpopular candidates Hillary Clinton and Donald Trump, many voters will be holding their noses as they vote or won’t be voting at all. This is especially true for younger demographics, who have the lowest voter turnout rates in the nation. While the candidates’ policies have been largely overshadowed by political scandals and heated bickering, their views on primary and higher education will no doubt have lasting impacts on American students.

Clinton’s education plans, while flawed, provide much greater benefits to students and most Americans as a whole. Trump’s plans, on the other hand, will degrade the public school system and have limited effects on nearly all college students.

Clinton is pursuing a bold and expensive plan on making higher education more accessible. According to her website, her top priorities include making community college free, funding minority-majority colleges and assisting student parents. Most notably, she plans to make public colleges tuition free for families with incomes at or below $125,000 by 2021. On the topic of student debt, Clinton has proposed cracking down on predatory schools and lenders, cutting loan interest rates and offering a three-month moratorium on student loan payments to federal loan borrowers.

Clinton’s plans will no doubt be an asset to lower-income families who cannot afford to send their children to college as well as to students buried in debt. Her plans have also earned her the endorsement of the American Federation of Teachers union. By making college more accessible to all students, her plan will greatly increase the number of students completing some form of higher education.

The main problems with Clinton’s plans are cost-related. According to the higher education writer and political analyst Kevin Carey, Clinton’s original education plan, based on making community college free, was economically feasible. However, after adopting many of Bernie Sanders’ policies, her new plan became extremely expensive and would reward states that spend the least money on students. An increase in tax rates on the wealthy would likely be needed to fund her ambitious program.

Trump, on the other hand, has no specific plan on student debt or even college in general. His claim that the federal government shouldn’t profit from student loans is a positive statement but far from the set of policies that America needs. In September, he revealed his goal of pressuring academic institutions with large endowments to spend more on students or lose their tax-exempt status. This would be a helpful action for some college students, but only for those who attend universities with multi-billion dollar endowments. Moreover, it is impossible to judge Trump’s plan for college education because he doesn’t even have one outside of the two simple statements outlined above.

Trump’s primary education plans are significantly better than his college education plans, but that isn’t saying much. An enthusiastic proponent of “school choice,” Trump believes that students should be able to attend any school they wish, public or private. This policy choice is interesting and could have the power to improve the educations of lower-income, minority students. However, it carries some significant flaws. Though Trump has touted such plans time and time again, he has never specifically stated how he will finance the $20 billion initiative. Given his opposition to raising taxes, the costs would likely either add to the federal debt or result in cuts to other parts of the current education budget.

School choice also furthers the degradation of public schools by taking money away from the public school system. Furthermore, because many private schools are religious, allowing tax dollars to pay for private schools that subscribe to a particular faith is a blatant violation of the constitutional separation of church and state, according to Public School Review.

Trump’s opposition to Common Core is a plus, as its standards are not based on sound research and have resulted in lower test scores, according to Western Journalism. However, the United States president has no power to repeal these standards, as they were adopted at a state level, according to NPR. Furthermore, ending Common Core is not a magical solution to America’s education problems. By basing nearly his entire education platform on denouncing these standards, Trump is ignoring issues plaguing American students that are not affected by the Common Core, such as nationwide achievement gaps and student debt.

Clinton’s K-12 plans, on the other hand, are probably more expensive yet simultaneously more far-reaching. While Trump’s school choice would push students to leave public schools, Clinton aims to go to the root of the problem by improving public schools themselves. Her website outlines specific policies on elevating the quality of teaching, investing in run-down schools and helping each student learn computer science. When compared to Trump’s simple viewpoints on K-12, Clinton’s plans help combat a broader range of education problems.

Unfortunately, Clinton has never stated how she will finance these new plans, and given the billions of dollars she has pledged to invest in this area, it is unlikely that simply reprioritizing the current budget will allow her to pursue these policies. As a result, Clinton’s extensive K-12 education plan will help students at the expense of higher taxes on the upper class—a consequence that is arguably relatively minor as it will likely affect few people.

Clinton’s policies have their own expensive flaws, but they greatly outweigh Trump’s college and K-12 education plans as they actively attempt to limit student debt and address primary education problems ranging from run-down schools to teaching quality. In the end Americans will have the final say: By casting a vote, we will choose either debt reduction and college accessibility or a bleak future for students.