Football clinches spot in CCS with victory over Mountain View 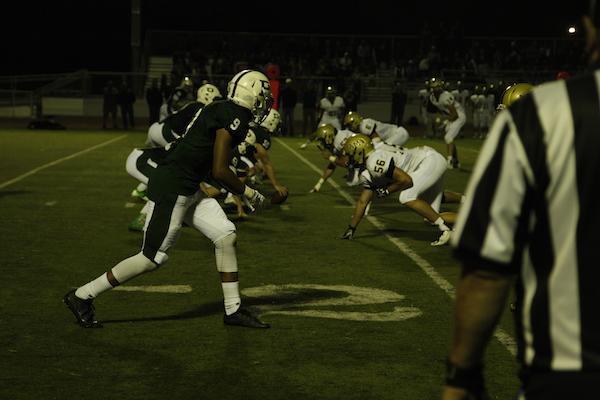 The Palo Alto High School football team (4-6, 3-3) is preparing for its first game in the Central Coast Section playoffs after it defeated the Mountain View Spartans (5-5, 2-4) on Friday night, earning the Vikings a spot in the playoffs.

After a tough loss to Los Gatos High School (7-3, 6-0) on Oct. 21, and a bye week, the Vikings bounced back and beat the Spartans. The victory secured the Vikings a fourth place finish in league and pushed them out of a potential tie with Mountain View.

According to Viking head coach Danny Sullivan, the bye week following the Vikings’ loss to Los Gatos was crucial to its success.

“We got a couple guys back that we needed and we were able to put in some new things that we wanted to try, and it worked out,” Sullivan said. “We challenged the kids a little bit and made sure they were ready to go.”

Throughout the game, the offensive line showcased strong play, according to Jackson III.

Paly fell behind during the third quarter after Mountain View scored two consecutive touchdowns, but the Vikings battled hard and fought back.

“The third quarter was strange,” Sullivan said. “We needed to keep pushing, keep putting the petal to the metal and we did the complete opposite. I had to really stick to them and say we need some energy right now. Luckily, we found it and the kids responded well.”

The energy was dwindling, but the players brought it back up.

“We managed to not put our heads down and keep them down,” senior defensive lineman Alec Cohen-Schisler said. “In the past we’ve had issues with getting down by one or two touchdowns or even just a couple of points, and really getting our heads down. I really made an effort to hype up our sideline, keep us in the game and make sure no one was giving up.”

At the end of the second half, the Vikings and Spartans were neck and neck, with with the Vikings up, 30-26. With the clock winding down, junior running back Sione Latu ran the ball for the final touchdown in the game. The Vikings won the match with a final score of 36-29.

“Sione’s got the ability to rip off a huge run which he did to clinch it at the end,” Sullivan said.

Jackson III says he feels confident that the Vikings will do well in its next matchup, the first round of CCS playoffs.

“We shocked a lot of people with this win tonight,” Jackson III said. “Going into the playoffs, I’ve never felt better. I have a lot of confidence in these boys.”

With its season on the line, Paly will face off against the Los Gatos Wildcats (7-3, 6-0) at 7pm on Nov. 11 at Los Gatos High School for the first round of CCS playoffs.