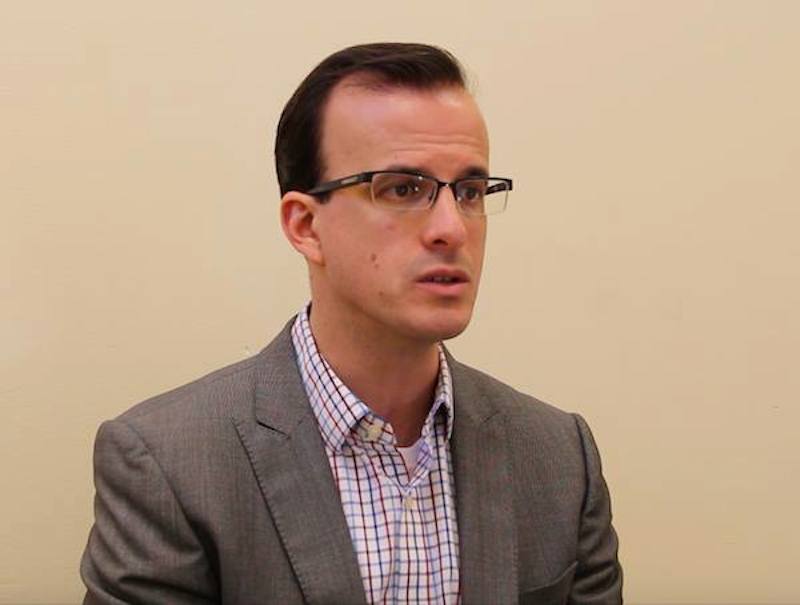 The Paly Voice interviewed State Assemblyman candidate Marc Berman ahead of the election to represent the 24th district. According to Berman, his top three priorities are education, housing and infrastructure. Photo: Chirag Akella

The Paly Voice interviewed State Assembly candidate Marc Berman ahead of Tuesday’s election to choose a new representative for the 24th district of California. According to Berman, his top three priorities are education, housing and infrastructure. Photo: Chirag Akella.

Marc Berman, a Palo Alto High School alum, attorney by training and current Palo Alto City Council member, plans to use his breadth of political experience to represent the 24th District if elected to the State Assembly on Nov. 8.

Berman is running against Vicki Veenker, a fellow attorney by training, for the open spot in the 24th District that will be vacated by retiring assemblyman Rich Gordon.

In an attempt to address the current achievement gap in California, Berman hopes to fund preschool to help low-income children enter kindergarten at the same level of their more affluent peers.

”I think it starts with preschool,” Berman said. “Ninety percent of a child’s brain develops before they turn five, but they start kindergarten at five years old, so low-income children are starting kindergarten 18 months behind their more affluent peers here in Santa Clara County. I think that universal preschool for all four-year olds is critically important, starting with low-income four-year olds. Expanding learning opportunities for youth from birth to three is going to be critical to closing the achievement gap.”

Berman also expressed concern for the lack of in-state students being accepted into the University of California system in recent years. He plans to focus on increasing the accessibility to the UC system for California students.

“I was talking to the chancellor of UC Santa Cruz about this,” Berman said. “And he said ‘Let’s take a wholesale review of the master plan for education, which promised accessibility to an affordable high quality education for California students who qualify.’ We still have the high quality part but we don’t have the affordable and accessible. We definitely need to revisit it.”

With plans to create more educational opportunities for students, Berman recognized the need for additional funding. Despite not citing any specific parts he would address, he said he plans to reform the current tax structure to create more tax revenue.

“I think there really needs to be a broader look at our tax structure as a whole to identify how much funding we want,” Berman said. “We need to identify a tax structure that is as stable as possible so that every year we generate money as close to that as possible without the wild swings that we currently get.”

Campaign finance has become an big issue in this campaign, as Berman’s opponent, Veenker, and many others, including congresswoman Anna Eshoo, have voiced concerns over the amount of donation money Berman has received from special interest groups. Despite significant donation money from a realtors group, Berman said that the enormous sum won’t sway his policies and priorities, insisting that the group’s major priorities align with his.

“The three issues that the realtors really care about a lot, which align with mine, are education, housing, the need for smart growth, housing supply and infrastructure because the better the parks, the better the community and the higher the house values are,” Berman said. “My platform just very well happens to align.”

Berman also voiced his disapproval of rent control, a topic supported by his opponent.

“A place where my opponent and I disagree is on rent control,” Berman said. “I don’t support rent control and I definitely support increasing the supply of housing. I think that is what we need to do to stabilize rental rates and hopefully bring them down a little bit.”

Berman stressed the importance of improving California’s infrastructure and promised to allocate resources to fix it. To raise the funds needed to undergo such projects, Berman cited multiple proposed taxes, including one on electric vehicle owners.

“Sen. Jim Bell, who is a state senator for San Jose and surrounding areas, has put forth a short-term proposal that gets funding from a variety of different methods,” Berman said. “One is increasing the gas tax which hasn’t been increased in a couple of decades and another is increasing the vehicle license and registration fees a small amount. Also, I believe having a fee of 100 dollars a year for EV owners is totally viable and reasonable to help collect money. Long-term, I believe we need to have a vehicle miles traveled system to help get taxes to repair our roads. It will take some upfront money, but it will save us money if we get our roads up to high quality.”

“I support a split role, which would be having commercial property, assessed on a more regular basis and not changing it for regular property, because that would have a detrimental effect on a lot of seniors on fixed incomes,” Berman said.

Berman also discussed his concerns with Gov. Jerry Brown’s current plan to build a bullet train for transport from Los Angeles to San Francisco and expressed a desire to focus on local transportation first.

“I don’t support the bullet train as it is right now because I think we need to address our regional transportation problems,” Berman said. “In 12, 14, 16 or 18 years from now, I believe that we will have better technology to get us from San Francisco to Los Angeles and so I think we have to focus on helping people get from Alameda to Palo Alto.”

Berman expressed a desire to move towards incarceration and away from the death penalty, citing issues such as mistakes, cost and length of time.

“It [the death penalty] takes a long time, it is expensive and I think that life without the possibility of parole is a legitimate punishment for people who have done terrible crimes,” Berman said.

Berman is in favor of marijuana legalization, as he hopes that being able to regulate it can lead to more tax revenue and fewer sales to younger demographics.

“I do support the legalization of marijuana because I think we are better off regulating it, taxing it and enforcing it,” Berman said. “Let’s legalize it so that we make sure only people who are 21 and older can purchase it in a well-regulated climate.”

Water conservation has become a hot topic in California with the prolonged drought. Berman said that he believes rainwater needs to be caught and used more effectively and more technology needs to be used to efficiently use water in farming to grow crops.

Berman believes that his vast experiences, including serving as a Palo Alto City Council member, has set him up perfectly to represent the 24th District.

“I think it’s the breadth of experience that I have across all three sectors that really prepares me to step in on day one and be an effective member for the 24th assembly district and for all of California,” Berman said.

To learn more about his opponent, Vicki Veenker, click here.