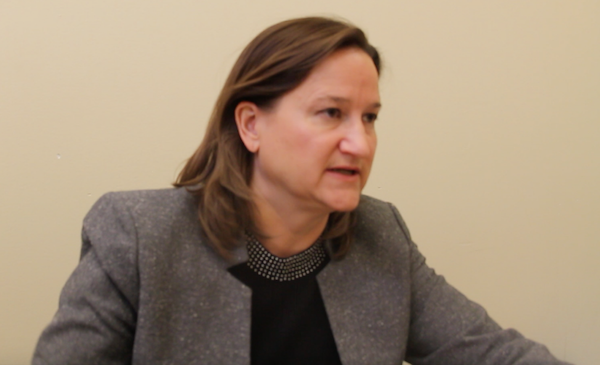 Vicki Veenker, a Palo Alto High School parent, well-respected attorney and member of the Silicon Valley Law Foundation, believes that her prior knowledge representing low-income individuals and uniform support from environmental leaders will lead to success in Sacramento, despite her lack of elected experience.

According to Veenker, if elected, her top three priorities would be reducing greenhouse gases through aggressive petroleum and energy regulations, securing water supply through agriculture subsidy reductions and conservation and increasing education funding through commercial tax increases, income tax extensions and lower sentences for non-violent offenders.

In an attempt to improve consistently low-ranked California education, Veenker has a lofty multi-pronged approach.

“If we spend $8,000 per student, when the national average is around $11,000, that is embarrassing for a state like ours,” Veenker said. “We have to reduce class sizes by attracting good teachers and hiring and retaining them.”

She is also in support of universal pre-kindergarten and STEM education and upholding the role of charter schools, but with the need for more accountability and transparency.

These extensive education plans come at a huge cost, which has forced Veenker to propose a number of tax raises. She wants Prop. 55 or the extension of income taxes (without the sales tax increase), a split role for property taxes where only commercial property taxes are raised and saving money through criminal justice reform.

Veenker expressed concern about the achievement gap in schools and offers a slightly different approach than her opponent. She believes that although the local funding control formula is a good start — which gives extra allocation of funds for English learners and low-income students — there needs to be a continued monitoring of the districts that receive that money.

Veenker conveyed problems with University of California’s reliance on out-of-state enrollment, partially stemming from her daughter’s own experience. She wants to shift the share of educational costs from 30 percent covered by the state to 80 percent. She did not, however, express a specific funding source for these goals.

Like her opponent Marc Berman, Veenker wants to see the death penalty repealed.

Veenker has made the phrase “education over incarceration” a major plank of her campaign. On the issue of criminal justice reform, she supports “realignment from jails and reducing the length of non-violent offenses.”

She has supported marijuana legalization in the past, calling it “inevitable,” but believes in regulating it “at least like alcohol or tobacco.”

While Veenker did not express any specific marijuana regulations she wants included, she did advocate for learning from other states along the way. She also expressed great concern in how law enforcement assesses sobriety, because technology does not currently exist to assess marijuana intoxication in real time. One of her main reasons for supporting legalization is to reduce jail sentences and to stop illegal marijuana farming in state parks.

Veenker has made climate change a major issue of her campaign and says her differentiating factor is her “uniform support by environmental leaders for my campaign.”

She is in support of requiring 50 percent of electricity to come from renewable sources by 2030 and reducing petroleum use as well to cut greenhouse emissions by 50 percent by 2030. Veenker additionally wants to continue the landmark cap-and-trade program in California.

Veenker said she she believes in both a residential and agricultural approach when addressing the water issue in California.

“Conservation is great but I don’t think that will get us all the way to where we want to go on this issue,” Veenker said. “We should decrease the subsidization of water prices to farmers, which they aren’t going to like at the get-go.”

She felt that we should “subsidize their adoption of this sort of water-saving technology.” Veenker also believed that California should channel money towards Silicon Valley to research innovative ways of saving water.

Veenker supports a more aggressive approach to affordable housing but has some reservations about some of the currently proposed models. She supports a state housing bonds and tax incentives to encourage affordable housing, a one-time spinoff of the budget surplus to fund housing projects and wants a more regional approach to housing. She did not support requiring where and how much a municipality has to build.

Governor Jerry Brown’s high speed rail project has become a controversial issue as the costs have increased by 50 percent and obstacles have grown, according to The Economist. Veenker supports an extremely modified version of the high speed rail while her opponent is fully opposed to it.

According to Veenker, her main concern is the increase in costs, which has pushed up estimates by 50 percent. Instead of connecting the high speed rail to San Francisco which she feels is futile, she wants to see it blended into the Caltrain at San Jose with a “common platform.” While not stating outright opposition to the high speed rail, she stated that she wants to see “a new plan and appropriate oversight to make sure we do better this time in living into the plan.”

Veenker wants to use some of these high speed rail savings combined with bond measures and tax increases to help solve the Bay Area’s gridlock.

“We have a crisis in transportation right now, today, in the Bay Area and we have to get busy fixing that,” Veenker said. “We are starting to with the measures in Santa Clara County, the half cent sales tax, helping electrifying Caltrain and getting BART down the East Bay.”

Campaign finance has become a hot issue in Sacramento with various reform bills going in front of the assembly, the most notable being the DISCLOSE Act. According to the Secretary of Election’s official site, Veenker has received the largest donations from the Silicon Valley Progressive Women for Equity and Oportunidad Supporting Vicki PAC (near $200,000). The PAC is comprised of $25,000 from both the Consumer Attorneys of California Independent Campaign Committee and the Commercial Workers Western States Council Independent Expenditure PAC. Her opponent has benefited from more than two million dollars in outside spending.

To learn more about her opponent, Marc Berman, click here.