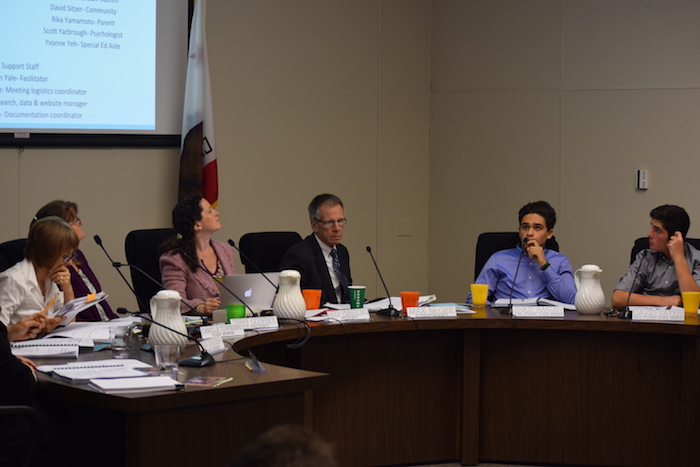 Before a packed and impassioned audience, the Palo Alto Unified School District Board of Education during a lengthy meeting last night voted unanimously to include both weighted Grade Point Averages on mid-year reports to be sent to colleges for the current senior class.

Already-uploaded transcripts will not be amended to include the weighted GPA, but if students need accommodations before the mid-year transcript, the board directed staff at the high schools “to do their best to accommodate those students.”

The board members left unresolved whether they would give students the option to choose between weighted and unweighted GPAs or to include both automatically.

There are several weighted GPA options currently being considered. Paly Principal Kim Diorio clearly supports only including unweighted GPAs, but forced to choose, she recommended including the UC-weighted GPA.

Diorio also said that she knows that at least 50 students will be negatively affected by this decision. Those students, according to Diorio, tend to be low-income, historically underrepresented, and students with Individual Education Programs.

The decision came less than an hour before the Early Decision deadline for college applications, effectively changing how students are assessed for all high school classes they have already completed.

Last night’s debate revolved mainly around the issue of reporting weighted versus unweighted GPAs on transcripts for students. This topic recently arose due to a Palo Alto High School senior voicing concerns about the disparities between how Gunn High School and Paly report GPAs.

The student, Maya Katz, asserted that because Paly does not currently report weighted GPAs, she is disadvantaged for certain merit scholarships that consider GPA as the primary criteria, most notably scholarships at the University of Oregon. The current practice at Paly is that, if a student would benefit in the scholarship consideration process from having his or her weighted GPA reported, the Guidance Office will contact the specific universities and vouch for the student’s weighted GPA.

The board essentially overruled a more tempered proposal from Supt. Max McGee that called for a committee to explore the implications of a weighted GPA.

Gunn currently reports weighted GPAs in the Common Application — but not on transcripts — and contacts specific colleges if necessary, as Paly does.

The school board meeting, which was extended until 11:30 p.m. to focus more deeply on this issue, featured 35 speakers, the majority of whom were parents, although three students did speak. The speakers voiced unanimous support for reporting weighted GPAs.

Katz, who spoke at the meeting, said she believes that the problem stems from students not being fully informed about how the GPAs are reported.

“I just feel that other students don’t necessarily have the information that they needed,” Katz said.  “There’s a lot of things that the teachers are saying, that the admin is saying. There is just so much information. It’s all so complicated, and I just don’t know why it should be that complicated, but it is. I don’t think students have access to the right sources, from the right people.”

A petition to move towards reporting weighted GPAs that has been circulating among the Palo Alto community reached 430 signatures as of Wednesday morning.

A dissenting petition by tenured Paly teachers has reached 68 signatures. There are only 100 tenured teachers on the campus.

School Board member Terry Godfrey, who has a senior at Paly, tearfully expressed reservations about the decision regarding weighted GPAs.

“I want to be sure the voices of the students who aren’t comfortable coming to the board to speak are included,” Godfrey said. “If changing the way we report GPAs is going to change behaviors we should know what those changes are and make a conscious decision.”

The board agreed to hash out the details of a long-term solution at a later point. More details will be published soon. You can read the full board report here.