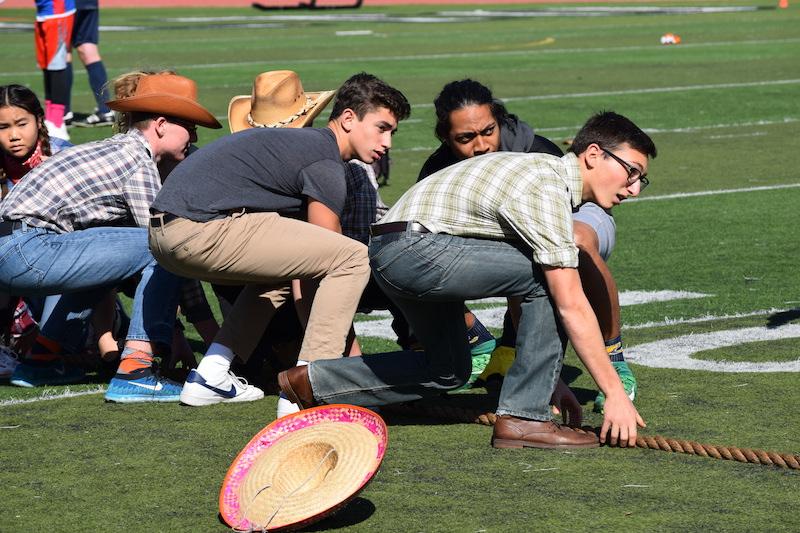 The competition heats up as seniors performed strongly in today’s lunchtime rally, fueling the rivalry between the upperclassmen.

As part of today’s salad dressing theme, the seniors dressed up in togas, juniors in Hawaiian gear, sophomores in cowboy attire and freshmen in athletic apparel. The lunchtime rally featured a tug-of-war contest, as well as the usual cheers and a best dressed competition.

For the first time, Palo Alto High School’s Associated Student Body strayed from tradition and allowed judges to randomly pull the order in which grades would participate in the tug of war from a hat.

“I was impressed and surprised by the fact that the freshmen took third place in tug of war and beat the sophomores,” freshman Griffin Kemp said.

After a hard-fought battle in the championship round, the seniors prevailed over the juniors to claim the win.

“Our whole team was really pumped because we [the Class of 2017] have never made it to the championship round before,” tug-of-war participant senior Lauren Koyama said. “We all knew we had to redeem ourselves for the past years.”

Despite the loss, the juniors are still optimistic about their Spirit Week chances.

“Although we lost to the seniors this year, I think our class has a lot of spirit and we can definitely can make a comeback in the next couple days,” junior Xander Sherer said.

Total points will be posted at the end of float building on the ASB website at 9:30 p.m. Spirit Week will continue tomorrow with the Night Rally from 7 to 9 p.m. Check The Paly Voice for more updates on Spirit Week 2016 under the new Spirit Week tab.