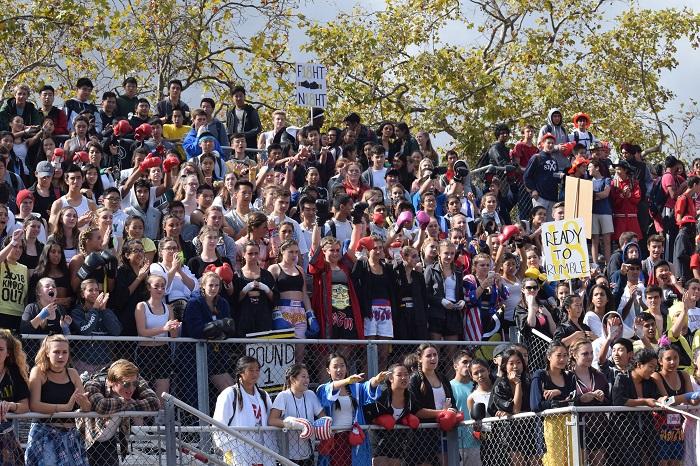 The first day of Spirit Week saw the debut of several new activities in addition to some old classics, creating a level playing field for both veteran and rookie competitors.

As usual, Spirit Week started off with “Theme Day,” where each class (except for seniors) dressed up for its respective themes. The freshman theme is “Eye of the Tiger,”  the sophomores, “Firefighters,” and the juniors, “Boxing.”  As per tradition, the senior class dressed up in 90’s attire instead of its theme, “Game Over.”

The sophomores managed to take first place in “Knee Trembler” after barely edging out the seniors, while the junior class won “Pass the Water.”

Despite losing both of the new events, the senior class was able to get a win in the “Banana Bump” activity.

According to senior Jackson Dahl, who won the event, the trick was to get some momentum going.

Dahl came from behind to get the win for the senior class.

“Well, I was practicing last night and I knew that it was hard to get started,” Dahl said. “But once I got going, I knew I was unstoppable.”

Despite not winning an event, members of the freshman class still had a good time.

“We weren’t exactly experienced, but it was fun nevertheless and I like dressing up,” freshman Lanie Germain said. “The seniors helped us out a bit.”

There was a minor disruption during a break between activities when several junior boys ran out onto the field holding a sign containing profanity targeted at the senior class. According to senior Vice President Natalie Maloney, the junior class as a whole will lose sportsmanship points.

Total points will be posted at the end of float building on the ASB website. Spirit Week continues tomorrow with Salad Dressing Day. Continue to check the Paly Voice for more updates on Spirit Week 2016.