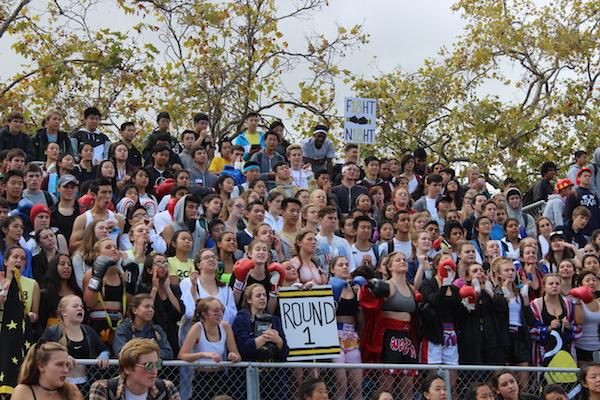 Palo Alto High School students cheer during a rally at lunch today on the football field. According to junior class president Jaiveer Sandhu, the rally was a success and an omen of victory for the junior class. "My personal highlight today was during pass that water when the Juniors came in first. That was big and I think it's a sign of more first place wins to come throughout the week." Photo: Rachel Code

Can the junior class beat the tropical heat? Will the Roman armies of the senior class reign victorious? Tomorrow, Palo Alto High School students will don all their salad dressing garb and compete in a tug-of-war tournament during the second day of Spirit Week.

In addition to dressing up, the classes will compete in a tug-of-war tournament. Each grade’s team will be made up of 10 girls and 10 boys, and the first class to pull a flag tied to the rope past a line in the middle will win.

Junior class president Jaiveer Sandhu said that he is very excited for the event.

“It [Tug-of-war] is one of my favorite events because it’s really visual to the crowd,” Sandhu said. “It’s really in-your-face to the other classes too.”

According to Sandhu, Paly football players may be unable to participate in the event because of a scheduling conflict.

Make sure to tag all of your Spirit Week social media posts with #palyspirit for a chance to be featured on The Paly Voice website.