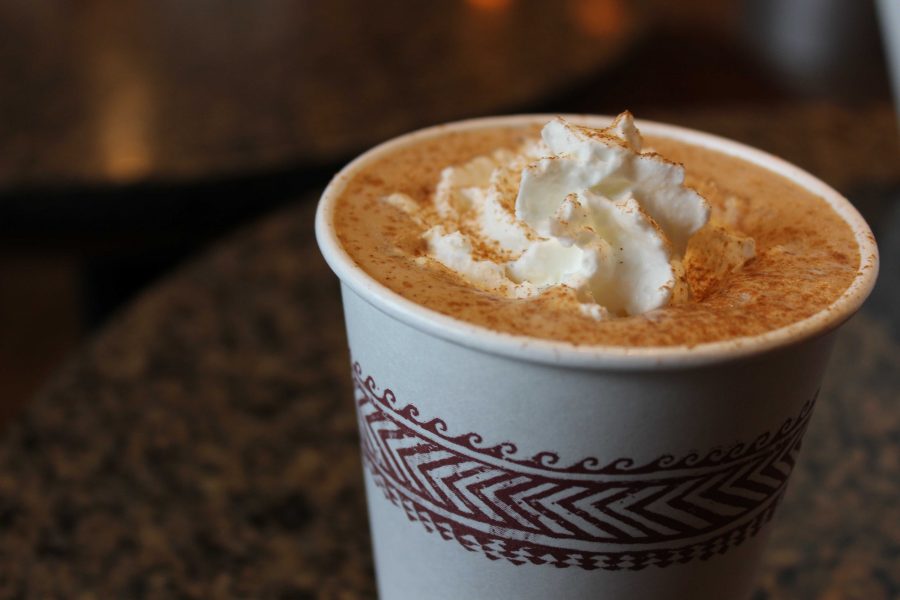 The trees in Palo Alto have begun their rusting transition from green to red, leaves are slowly collecting in multicolored piles to run through and crunch underfoot and the weather is steadily getting chillier.  It’s safe to say fall has truly begun. However, besides these climate changes, the true quintessential signifier of autumn’s beginning comes in the form of pumpkin spice.

Businesses around the Bay Area, complying with the mass hype surrounding pumpkin spice, are busy producing ridiculous assortments of pumpkin drinks, snacks and desserts. Unlike themed holiday products, pumpkin spice is not in celebration of any particular event, but the excitement  that seems to follow it seems to be worthy of its own form of holiday.

Peet’s Coffee and Tea has recently released a completely new menu with an assortment of pumpkin drinks. These include the Pumpkin Latte, the Pumpkin Chai, the Pumpkin Mocha, and the Pumpkin Javiva.

Is this seasonal collection really equivalent to “fall in a cup”? Does pumpkin really go with everything, even chocolate? The Paly Voice decided to test out what this pumpkin spice craze was all about.

Below we have picked three areas to judge: Aesthetic, Taste and finally Fall spirit. 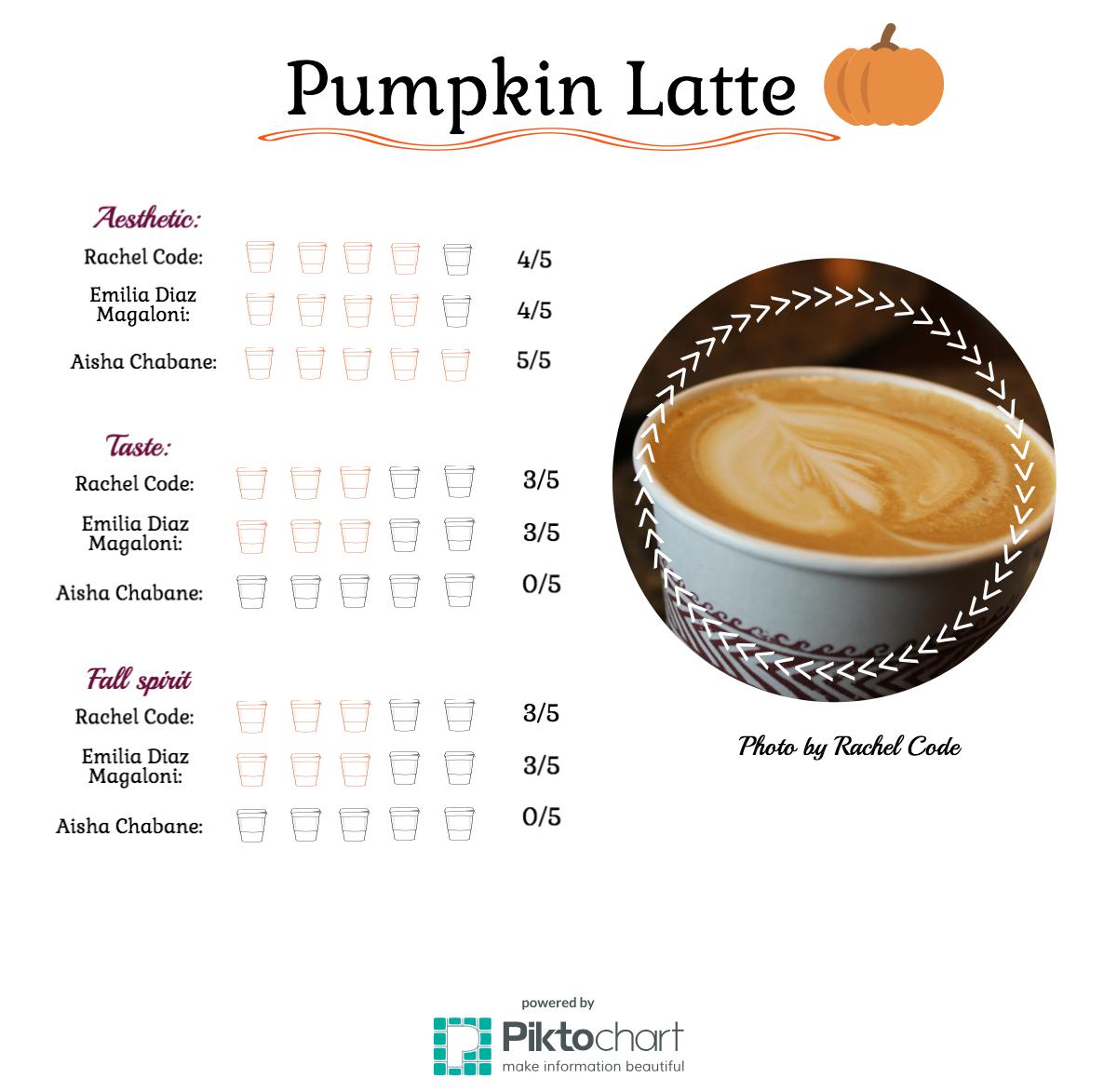 We started off with the Pumpkin Latte ($3.75 for a small), a creamy coffee topped with a small peak of white foam. It looked like your average Peet’s latte, with equally creamy blend of milk, and strong coffee but with slight hint of what could be inferred to be pumpkin flavor. The reality was that it tasted like a strangely bitter sugar sweetener with maybe a hint of cinnamon. We were all quite unimpressed with the drinks unassuming appearance and lackluster taste. It was a decent latte, but a poor pumpkin drink. 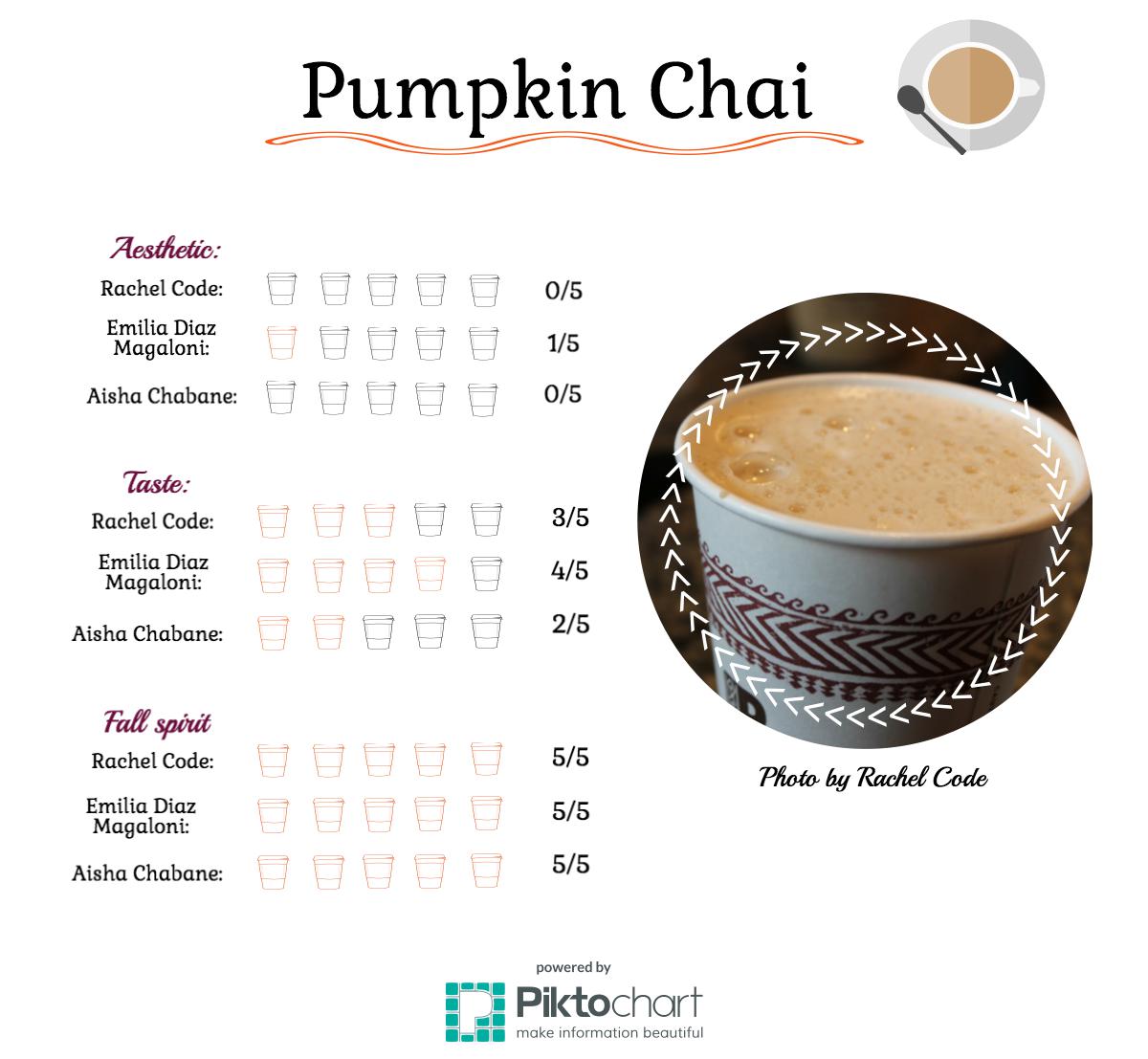 The Pumpkin Chai, $4 for a small comes in a solid white paper cup and is topped with equally bland and slightly droopy white cream. However, the aromatic scents of cinnamon, chai spices, and pumpkin wafting up from this drink were enough to leave our mouths watering. Taking a sip of this drink was like taking in fall in a mouthful. A wonderful warmth fills each sip, the thick taste of cinnamon creating the picture the warm fireplaces and changing leaves hued in a kaleidoscope of color. However, there was still a slight bitterness from the artificial pumpkin that accompanied the warm aftertaste of this drink that kept us from enjoying it fully. 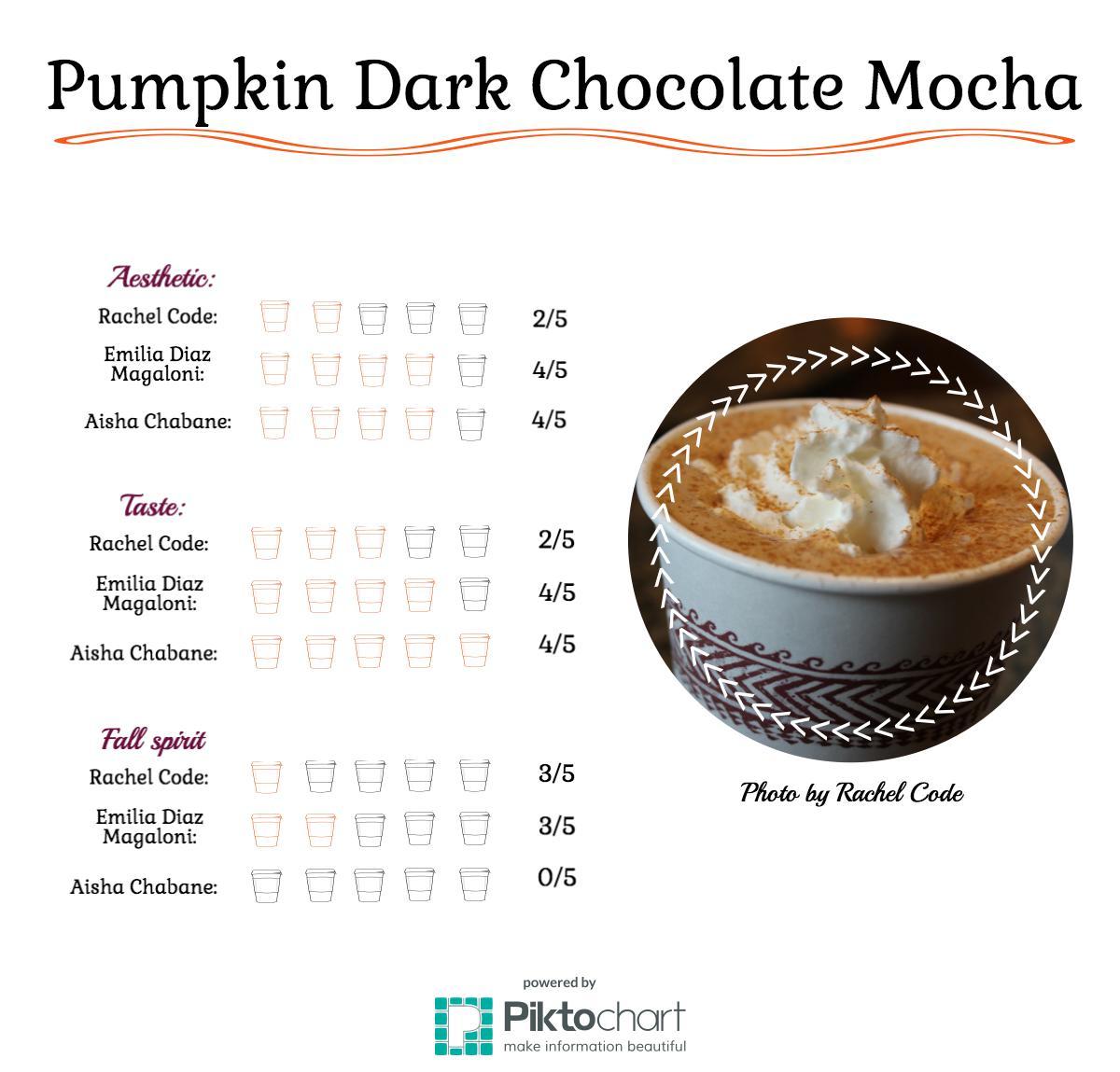 The Pumpkin Mocha $4 was an elegant ensemble of fluffy whipped cream topped with a colorful sprinkling of cinnamon and chocolate powder. It was by far the most creative presentation of the four new drinks on the fall menu. We were all quite skeptical of a pumpkin-chocolate combination, but the two flavors combined surprisingly well. The thick coffee accentuated the flavoring of dark chocolate and the small accents of pumpkin were pleasant and subtle, however, not overpowered by the coffee and chocolate flavoring. With fun presentation and the unusual flavor combination, it felt like the perfect drink to order as a festive fall treat. 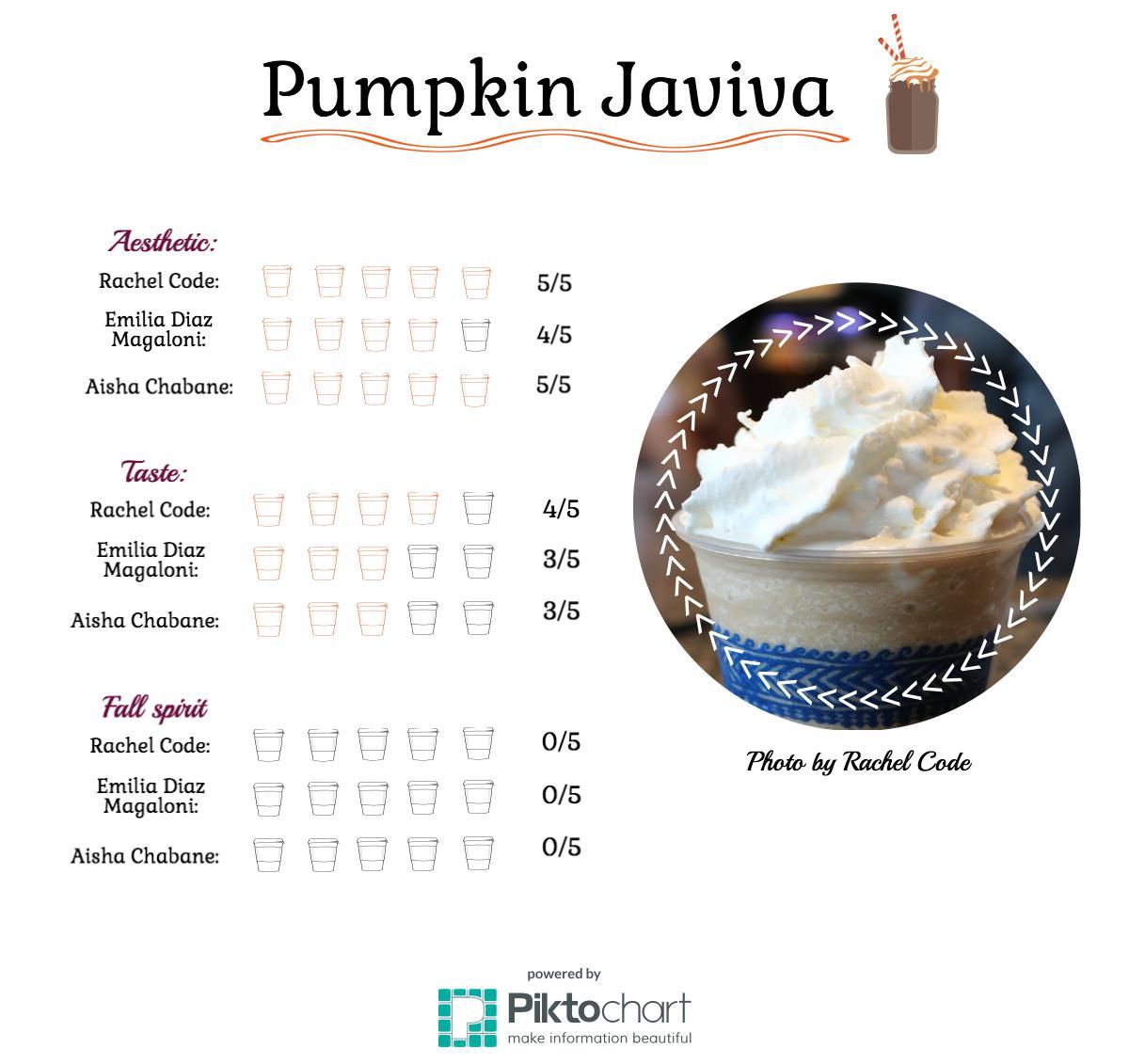 The Pumpkin Javiva ($4 for a small), was a decadent swirling of toppling whipped cream served in a clear plastic cup revealing the drinks frothy caramel coloring. With each sip, you were overwhelmed by a fury of cinnamon, pumpkin and sugar. The taste was a perfect match for the desired seasonal flavoring, but after the third or fourth sip, the drink grew too sweet for our tastes. However, if in the mood for a Javiva, we consider this the perfect option. The pumpkin and cinnamon tones in this drink make it a great option for an autumn drink.

The Pumpkin Chai, with its rich cinnamon flavoring and comforting warmth, came out as a clear winner in terms of how authentically “fall” it was. However, in terms of taste and a fun presentation, we would recommend the Pumpkin Mocha, an unusual match of flavorings to spice up these increasingly chilly weeks. Overall, even if you are a more traditional coffee drinker, we still recommend giving these drinks a try. Although pumpkin spice did not totally live up to its legendary hype, these drinks are great for the occasional treat and a fun way to get into the autumn spirit.