Boys’ water polo routed by Gunn for the second time 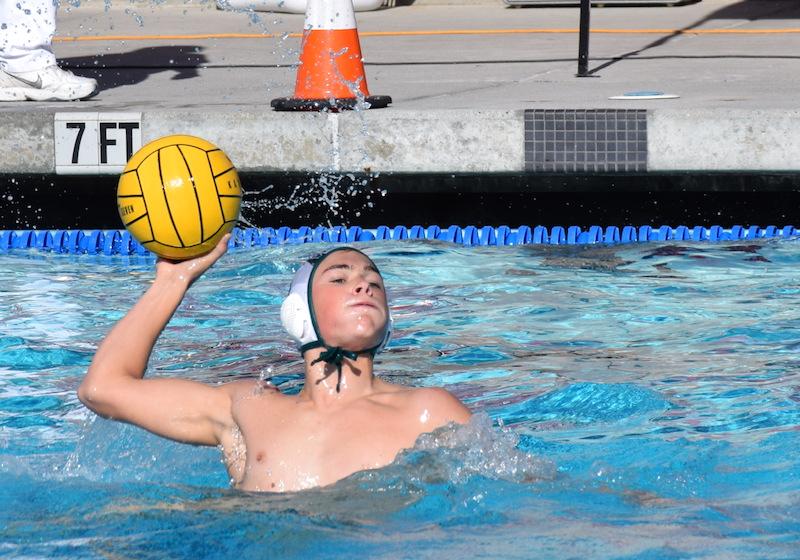 Senior field player Eric Maser scores on a volley from the left side of the pool in the 1st quarter. Photo by Ethan Kao.

This loss marks the second De Anza League loss for Paly, with both losses coming against Gunn. Although junior field player Jack Andersen and several senior field players gave their best efforts, the Vikings fell short to the overpowering Titans who led the Vikings for the majority of the game.

After Andersen’s first goal early in the game, the Titans scored four straight. However, the Vikings persevered and continued to battle for the entire length of the game, unlike their last match against Gunn, according to Paly senior field player Tommy Smale.

“I don’t like losing to Gunn at all, but we have gotten better since the first game,” Smale said. “Last game, we died in the second quarter. But this time we fought to the fourth quarter.”

Although Anderson credited his goals to clear communication and constant activity, he said the team could have fared better in those key areas.

“We were on and off,” Andersen said. “We scored when we had teamwork. Both of the times I scored, it was off drives created through my teammates moving. As a result, I could get open because the defense had to move, and I took advantage of that. We need to work on having that great movement throughout the entire game. We didn’t have that movement the whole time, especially the third quarter.”

Goalkeeper Ben Rapperport also had his own perspective to offer on what type of improvements the team can make.

“We need to consistently get back on defense and make our shots, and if we do that, we can limit the goals we let in and win our games against Gunn,” Rapperport said.

With these improvements regarding team movement and defense, Andersen said the team can bounce back with a win.

The Vikings will play their next game at 3 p.m. on Wednesday at Saint Francis High School.