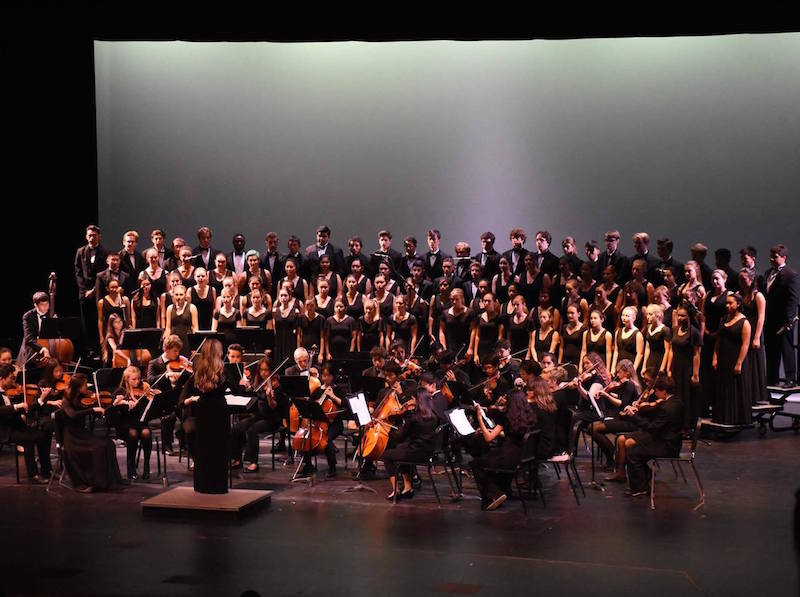 The highly anticipated Performing Arts Center is officially open for use by the Paly community after a grand opening Saturday, after a large crowd of Palo Alto teachers, parents, students and community members came for a celebratory gala.

To open the four-hour ceremony, instrumental music teacher Jeff WIllner and the Paly Symphonic Band took the stage, playing “Magic To Do” from “Pippin”, and finishing with the Paly fight song, which raised a roar from those in attendance, many of whom were Paly alumni.

Principal Kim Diorio explained the importance of the building, and what it will bring to the community.

“It’s so amazing that we now have this humungous stage,” Diorio said. “Our [performing arts] program has grown over the last several years, so it [opening of PAC] good timing.”

Following Diorio’s speech, the Theater 3 and 4 honors classes used the state-of-the-art lighting and control center to put on a psychedelic and colorful display, while Willner’s orchestra and band played below the stage in the Orchestra pit.

“I was thrilled to be a part of the new theater’s big opening, because many people put in hard work to get it done,” said Arman Chalwa, a Theater 3 student. “I was really nervous because I felt like we had to do an excellent job introducing this building, but once I walked on stage I forgot all about my nerves.”

Madrigals, an advanced and selective vocal group, began its performance on the second level of the of the PAC, and strode through the theatre allowing the audience to view and capture the spirit of the program. The Madrigals enchanted the crowd with their extravagant clothing and marvelous tones. This performance also marked the beginning of the 50th year of the program.

“The Gala was such a mind-blowing experience,” said senior member of the Madrigal program Joao-Gabriel Carvalho De Pina. “To see all of the performing arts programs come together was amazing and unforgettable. You don’t get to see an event like this everyday and I’m so honored and so glad I was a part of it.”

Paly graduate and Broadway performer Alex Nee showcased his talents in a duet with senior Soo Kim and a solo acoustic guitar performance.

Following the orchestra’s initial performance, Paly choir groups filled the rafters behind the last line of cellos and violas, combining for a masterful performance, where vocals, instruments and technological lighting exhibited the potential of the venue. Almost interactive, the choir groups moved into the isles of the theatre, and then proceeded to captivate the crowd with the hymn “Gloria.”

The grand finale brought together all of the ensembles as members of choir, orchestra, jazz band and theatre were brought together to perform multiple songs and broadway numbers, most notably “For Good” and “Defying Gravity” from the musical “Wicked.”

Palo Alto native Rob Minkoff, director of “The Lion King,” introduced the final song, a Lion King Medley, which included the “Circle of Life.” As the crowd sang along, choir, orchestra, theater and band members provided the background vocals and music. Minkoff showed that he is much more than a Hollywood director, singing the lead part for a medley of songs from “The Lion King.”

Architect Erwin Lee worked hard with a committee of Paly teachers and administrators to model the PAC after Spanish mission style architecture, similar to that of the Tower Building, bringing a modern yet traditional aspect to the campus.

The next PAC event will feature “The Important of Being Earnest,” the upcoming fall play on Friday, Nov 4.