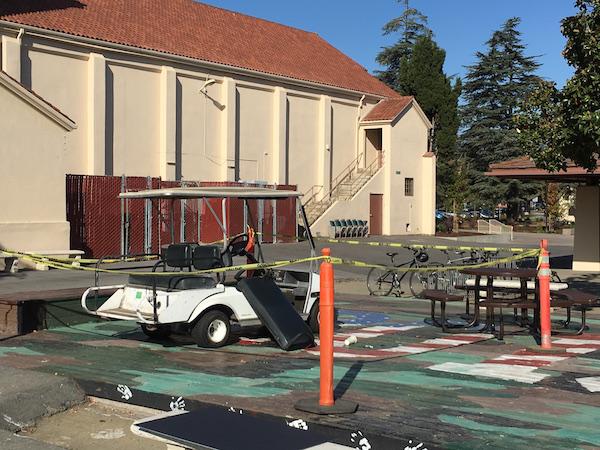 The golf cart appeared on the senior deck on the Paly quad this morning, garnering many students’ attention.

“Someone stole a golf cart from Stanford,” assistant principal Jerry Berkson said. “They drove it over here and then drove it around for a while and parked it on the deck and then tipped it.”

Berkson said that administrators are using video footage to investigate the theft.

“We [administrators] do have video on [of] them,” Berkson said.

According to Berkson, Stanford will handle resolving the conflict internally.

“It would be a felony, but it would be more of Stanford’s issue than ours,” Berkson said.

Berkson said the incident will have no impact on campus security policies and the student body will not be punished for the act.

“I don’t think it will have an impact [on other students],” Berkson said.

Senior Troy Henderson sees the cart as a nuisance, but thinks the scenario is humorous.

“It was pretty annoying having the cart on the deck,” Henderson said. “It could have easily been pushed off somewhere else so we could have more room to sit but overall it [the situation] was kind of funny.”