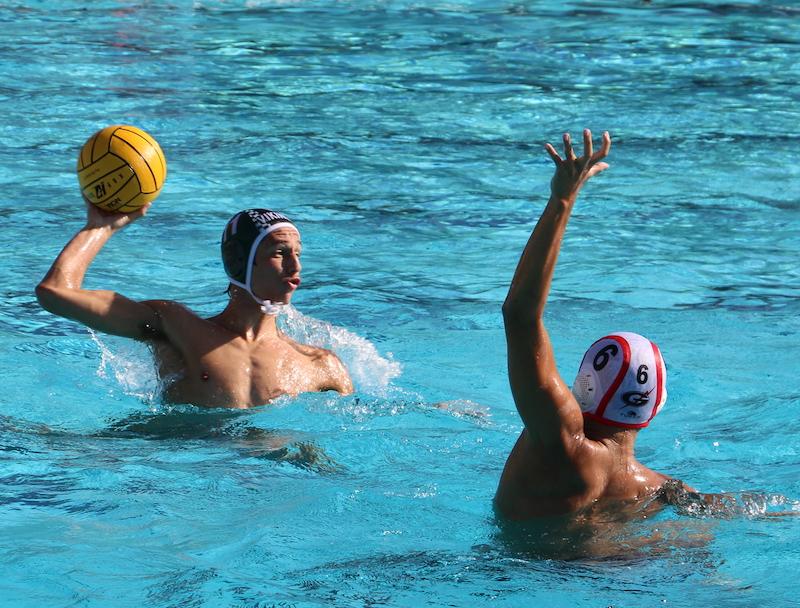 For as long as students can remember, Palo Alto High School and Gunn High School have maintained a ferocious rivalry, represented especially in sporting events. Once again, the time came for the competition to heat up this rivalry between the Vikings and the Titans as the two teams clashed on Tuesday in the Gunn pool.

Keeping up with this zealous spirit of tradition, the Paly boys’ water polo team (4-3, 2-1) fought hard with intensity and aggressiveness, which even led to an ejection. However, the Vikings fell to crosstown opposition Gunn Titans (3-1, 3-0) yesterday at Gunn, with a score of 8-4.

The Vikings kept the game close going into halftime at 4-3 with freshman star Jack Andersen putting up two of the three points, but they began to break down in the second half.

Senior field player Jared Stanley was ejected in the third quarter after several aggressive fouls in a short amount of time. The team morale soon began to break down and led to Paly’s demise, according to Stanley, who continued to cheer on from the bench.

“We came out pretty strong with a one-goal lead, but we had a few mental mistakes which eventually led to an uncalled-for ejection,” Stanley said. “I got sent out during the first minute of the third quarter when they [Gunn players] started targeting me and I fell into their trap. Everything went downhill from there, the team as a whole fell apart and we lost our team play.”

Fellow senior field player Ethan Bundy said that in addition to Stanley’s ejection, there were several other reasons why the Vikings were unable to succeed.

“I don’t think we played very well as a team and everything was disorganized,” Bundy said. “We missed easy opportunities. We knew what we needed to do coming into the game, but we just didn’t execute. Jared [Stanley] got three majors [fouls] which got him ejected. He is our top shooter so that was a big hit.”

Paly players were looking forward to the game against Gunn, according to senior field player Tommy Smale, with the results of the game upsetting the whole team.

“We were disappointed in the outcome because we were playing hard and this was a game everyone was looking forward to,” Smale said. “We had our opportunities but didn’t convert them, which we will continue to work on.”

Along with Smale, sophomore goal keeper Ben Rapperport says the team will bounce back with improvements.

“In practice we have to put our heads down and focus and get lots of shots up,” Rapperport said. “We need to pass the ball better and get our team back together.”

The Vikings face their next opponents at 6:45 p.m. Thursday at Los Altos High School.