Paly football runs away with home opener against Patterson 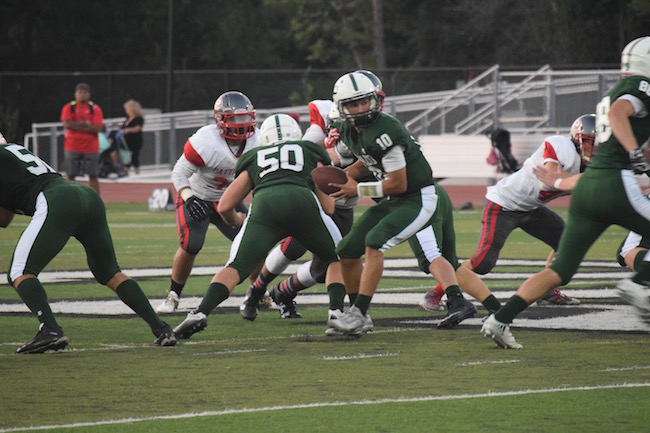 On the strength of a commanding rushing performance by junior running back Paul Jackson III, the Palo Alto High School football team (1-0,0-0) triumphed over the Patterson High School Tigers (0-1, 0-0), 25-12, in the Vikings’ first game of the 2016 season.

The Vikings stormed out of the gate with two rushing touchdowns in the first quarter by Jackson.

Midway through the second quarter, sophomore quarterback Jackson Chryst connected with junior wideout Jackson Hall who sprinted past the entire Patterson secondary for a 51-yard touchdown.

Competing in his first varsity football game, Hall was excited to have made a huge impact early on.

“First time ever performing on a big field like this and being able to get a touchdown for this team is the best feeling in the world,” Hall said.

The Vikings’ defense was superb, holding the Tigers scoreless in the first half thanks to outstanding performances by junior linebacker Ole Erickson and senior linebacker Christian Rider.

Paly failed to score in the second half, and its defense began to waver, allowing Patterson to reach the end zone twice in the third and fourth quarters.

Head Coach Danny Sullivan said the Vikings had a solid outing against a terrific team but need to work on playing hard for the full 48 minutes.

“That’s one of the best teams in the Sacramento section,” Sullivan said. “That wasn’t just a one-guy effort, that was a full team effort. But with a 25-0 lead, we have to be able to close out games.”

Starting senior quarterback Jordan Schilling recognizes that he made a lot of errors throughout the game but said he will continue to grind and improve his craft.

“I’ve got a lot to work on,” Schilling said. “Definitely on the offensive side I missed a lot of balls high and missed a lot of throws, but I’ll check out the film and we will get back to work.”

According to Patterson’s head coach Rob Cozart, the Tigers had a rough start and failed to convert on key plays, but they managed to find a spark in the second half.

“It was a tale of two halves for us,” Cozart said. “We gave up some plays, some short fields, and missed many opportunities, but we won that second half 12-zip. We just have to put together a complete game.”

Palo Alto will face off against San Benito High School at 7:30 p.m. next Friday in San Benito.