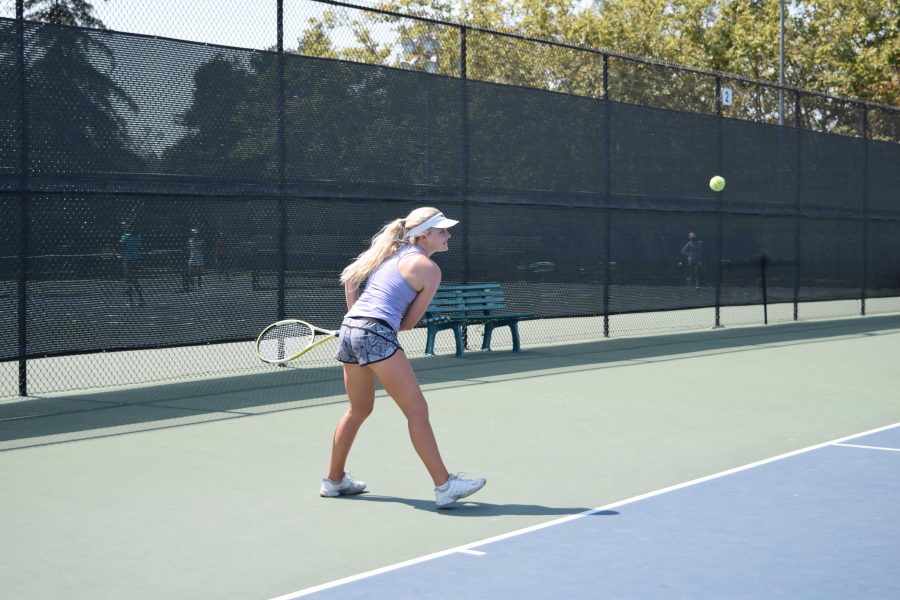 Captain Meredith Cummings prepares for a forehand swing during practice

With its first pre-season match coming a week from today, The Palo Alto High School girls’ tennis team is preparing for an exciting season of development with new players and a new league.

Last season, the Vikings placed second to last in the De Anza League with a record of 2-12, prompting head coach Andy Harader to move the team into the El Camino Division, the lower branch of the Santa Clara Valley Athletic League this year.

According to Harader, the team is in serious championship contention playing in the lower league.

“We have a much, much stronger team this year and I think we are going to win a League championship,” Harader said.

Cummings says she is optimistic for the coming season and the future of the team.

“The stars of the team this year will definitely be underclassman, since two new freshmen, Claire [Li] and Anuva [Banwasi], are ranked players and are extremely talented, dedicated and hardworking,” Cummings said.

According to Harader, the new players will allow for doubles play to benefit as well, as some of the singles players will be required to play doubles due to limited singles competition spots.

Paly’s greatest strength lies in its singles players, according to Li.

“We have good singles people and for doubles we have people that are really good at volleys,” Li said.

According to Banwasi, the Vikings need to polish their skills through hard practice.

“We haven’t done a lot of serving,” Banwasi said. “We do a bit [of serving] in practice, but we need to practice more.”

Cummings reaffirmed the need to push through other issues, specifically more technical ones.

“It is necessary to work on our volleying techniques in order to be fierce at the net,” Cummings said.

For its non-league opener, Paly will face off against Aragon High School at 4 p.m. on Thursday at Aragon.