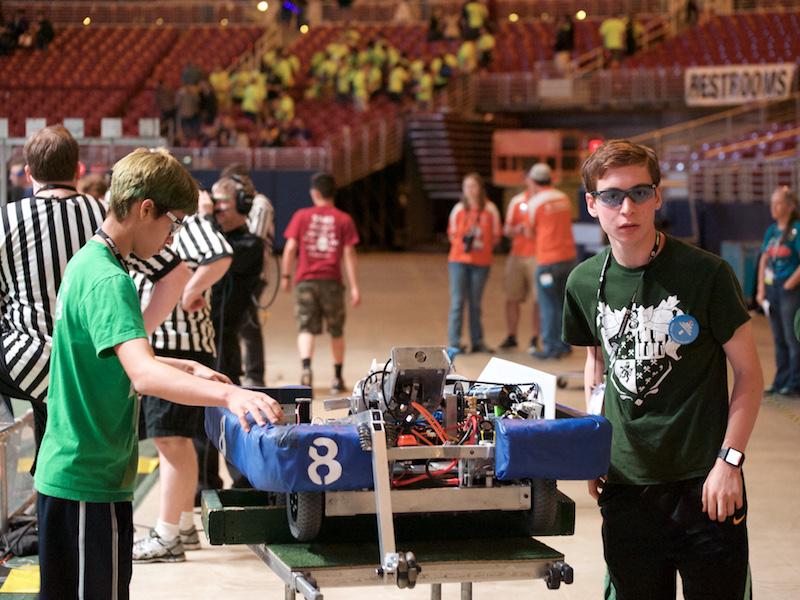 The Palo Alto High School Robotics team prepares its robot for its match at the FIRST Robotics Competition World Championships last weekend in St. Louis. The team’s robot, clothed in blue with the number eight on its side, is set up among many other teams’ robots. Photo: Eli Zucker

The Palo Alto High School Robotics team looks to continue this year’s success after scoring in the top 30 in its division at last weekend’s FIRST Robotics Competition World Championships in St. Louis.

The team, also known as Team 8, ranked 27 out of 75 teams in their division. According to sophomore team member Bert Davies, 600 teams around the world, including nations such as Canada and Israel, participated in the competition.

During the competition, teams are randomly matched together and work with each other to score the most points in a certain amount of time, according to Davies. Teams can score points by crossing barriers with their robots or shooting balls into a tower. Robots are controlled remotely by drivers. The alliance that wins the match gets points added to its cumulative score. The top three teams from each of the eight divisions advance to the playoffs.

Team 8 qualified to the competition through a series of wild cards during the Central Valley Regional, according to Davies. At Regionals, the top 10 teams were selected to go compete at Worlds. However, some of the top 10 teams were already guaranteed a spot at Worlds, leaving empty spots up for grabs. Therefore, even though Paly was not in the top 10, Team 8 filled the empty spots, thereby giving them a place to compete at Worlds.

At Worlds, although Team 8 did not end up placing in the finals, team members say that they are still very grateful for the experience.

“We were able to watch exciting matches of all of the world-class teams,” sophomore scouting and strategy captain Shota Yamamoto said. “The experience was great because we got to talk to teams from all over the world and learn about how their teams function in terms of team structure, their design phase and many other things.”

Team members were also able to learn more about robotics and different design tips and tricks.

“There were a ton of really cool workshops discussing how to improve your robot,” Davies said.

Looking towards next year, the team is looking to make changes to improve the team’s efficiency.

“We want to have a stronger team structure and stay a bit more organized,” Yamamoto said. “Another thing we are aiming for is more diversity on the team, with a better ratio of guys to girls.”

According to team members, robotics provides a great place for students to learn about robotics and build a community.

“I love robotics because the people on the team are really nice to each other,” Yamamoto said. “Everyone on the team is really close with each other too. Another thing is that it is not just about building a robot. At competition … each team has to compete with two other random teams [as allies]. In order to succeed in these matches, your alliance has to communicate with each other … I love robotics because I have gained and learned so much about technical skills, leadership skills and communication skills.”

With members hoping to advance to Worlds again next year, they have already started preparing and tinkering with their current robot.

“For the next step, I want to build a whole new robot for practice, using the information and tips we gained at Worlds,” Davies said.