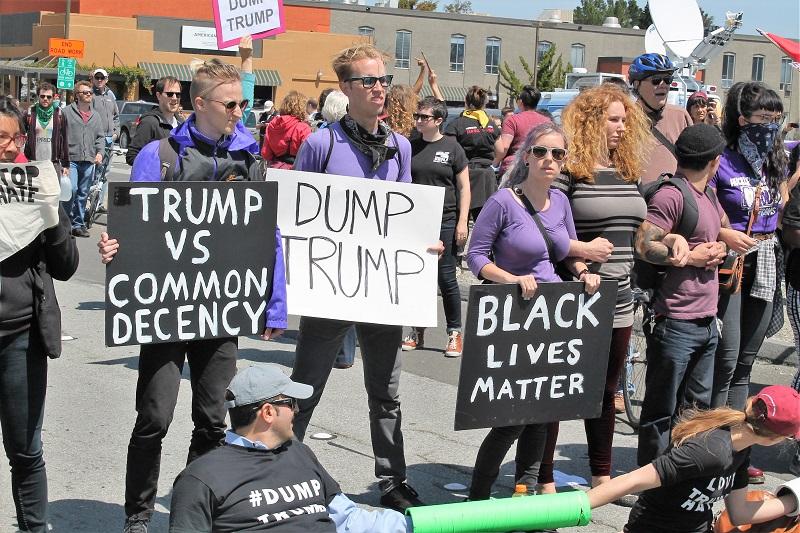 Demonstrators gathered at 11 a.m. outside the Hyatt Regency San Francisco Airport to express anger at Trump’s views, which some protesters say are anti-immigrant and anti-women. While the protest generally remained peaceful, several brawls broke out between pro-Trump and anti-Trump attendees, and metal barriers surrounding the hotel were removed by protesters hoping to interrupt Trump’s speech inside the hotel.

Dozens of police officers were dispatched to the scene after crowds attempted multiple times to enter the building, first through the front entrance and side doors and later by crossing an overpass linked to the car garage.

In addition, protesters carried signs with angry messages including “Mr. Hate leave my state,” “Trump is a rapist and conman” and “Dump Trump.” Others played musical instruments and formed barriers by linking arms.

Christine Veria, one of hundreds of protesters, says she attended the demonstration to show her children the importance of being civically involved.

“It’s so easy right now to sit back behind your phone screen or to be on social media being upset about things, but to actually take action is important,” Veria said.  “We want to lead by example. We feel very strongly that these are not the values we want our children to grow up on and that they [Trump’s values] are dangerous for the type of world we trying to build together.”

Other protesters cited Trump’s alleged sexism or racism as reasons for protesting.

“I hate Trump,” said Sheila, who declined to disclose her last name. “I hate that he’s fascist. I hate that he hates women. I am Muslim, he says all Muslims are terrorists. Do I look like a terrorist?”

Some of Trump’s supporters bore signs condemning the protesters, resulting in some hostile confrontations.

“I agree with many Republican values, however, I do not support any Republican candidates. Ted Cruz and Donald Trump are just disgusting human beings,” Chang said. “The media said that people vote for Trump is because he is ‘tapping into the fears’ of the people, a ‘successful’ businessman having confidence of not being politically correct, and so on. Most of their reasons are accurate. I remember the first time the media criticized Trump because he said many illegal immigrants are criminals, drug dealers and rapists, and the US should build a wall for them. This speech is indeed very extreme. But the general idea of strictly protecting the U.S. border is not extreme.”

The protest largely dispersed by 2:30 p.m., when the shrinking crowds were told to leave by police because of unruly behavior. However, protesters say their ideas were loud and clear, as they hope to send a message that they will not tolerate hate in California.