Change In Our Schools Week: Cultivating a positive community 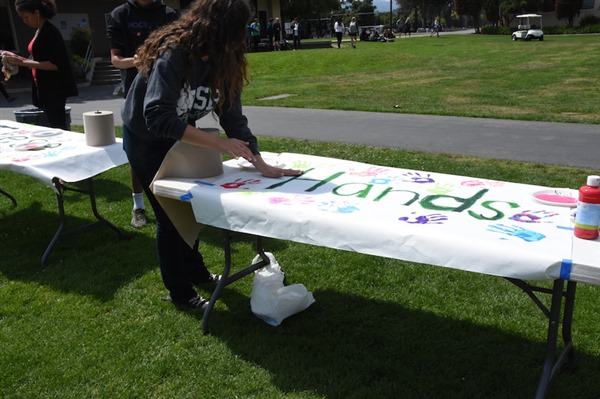 Senior ASB Treasurer Courtney Hall places a handprint onto the 'These Hands Don't Harm' poster set up in the Quad during lunch on Wednesday for Sexual Assault Awareness Day during Not In Our Schools Week 2015. This year, the focus will be on the positive aspects instead. Photo by Liana Pickrell.

A group of Palo Alto High School students will debut a week-long initiative to address different societal matters to foster a healthier community on Monday at Paly, according to student organizers.

“Change In Our Schools Week is basically a spinoff of Not in Our Schools Week, which is a national campaign to address various societal issues that are prevalent in schools,” Nagar said. “We changed it a little bit this year in a more positive direction to closely examine ourselves and our identity and how we choose to treat others.”

According to junior Cezanne Lane, another student organizer, each day has a specified theme. Monday focuses on “Paly Is” to recognize who makes up Paly and embrace different communities. CIOS Week encourages students to ask themselves “Who Are We?” on Tuesday to learn about different cultural, sexual and gender identities, as well as students’ different abilities. Wednesday’s focus is “How Do We Treat Each Other?” to investigate and improve relationships regarding sexual assault, bullying and social justice. On Thursday, the recently formed Sources of Strength group will lead an activity under the theme of “What Are Our Sources of Strength?” The last day is themed “How Do I Care For Myself?” to encourage students to self-reflect and change the way they address others and see the world.

Teacher on Special Assignment Eric Bloom, who has been helping the students plan the week, said that the idea came about when discussing the NIOS Week’s more negative outlook.

“There had been a discussion before about the negative connotations of ‘not’ as opposed to what to we want to see,” Bloom said. “The big thing was simply the idea that we wanted to celebrate or talk about what it is we want in our schools, not what it is that we don’t want.”

As well as agreeing with Bloom’s sentiments, Lane also pointed out the redundancy of NIOS Week over the years.

“We’ve been doing the same bullying activity since elementary school,” Lane said. “Instead of ‘Don’t bully, don’t do this,’ it’s more, ‘Let’s get excited about caring for each other and caring for ourselves and being kind human beings and being proud of Paly.’”