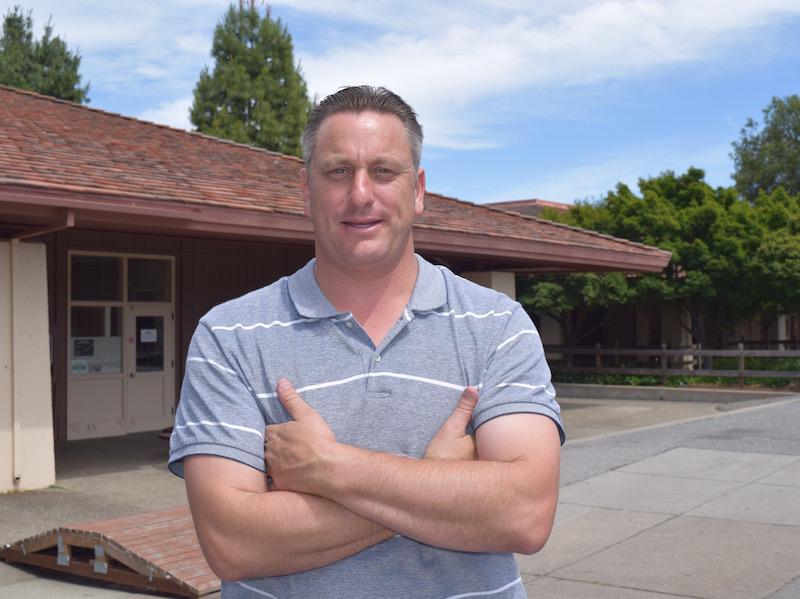 Jack Kearns, Palo Alto High School's new AP Environmental Science teacher, has an extensive background in ecology. He worked for the Environmental Protection Agency and as a wildlife biologist prior to teaching. Photo by Dhara Yu.

Jack Kearns, Palo Alto High School’s new AP Environmental Science teacher, has an extensive background in ecology. He worked for the Environmental Protection Agency and as a wildlife biologist prior to teaching. Photo by Dhara Yu.

Jack Kearns points out an oak tree located on the edge of Palo Alto High School’s campus Quad. “It reminds me of a baobab,” he says, referring to the bizarre-looking tree that graces the savannas of Africa, and spouts off a few facts about that plant. To most onlookers the tree is unremarkable, but to Kearns, Palo Alto High School’s new Advanced Placement Environmental Science teacher, it’s evocative of the Serengeti and worthy of more than a cursory glance.

Standing well over six feet tall, with the burly frame of an ex-football player, Kearns is genial and outgoing — he’s the type to give a vigorous wave to passing students and staff, or start up a game of volleyball on the Quad after school. It’s not hard to see why the administration thought him a suitable replacement for Kenyon Scott, the beloved Paly AP Environmental Science teacher who suddenly passed away in January.

“It’s an honor to go forward with Kenyon’s mantle, to follow in his shadow, to carry on what he had started,” Kearns said.

Kearns’ path to Paly was certainly a serendipitous one. He was working toward his teaching certification when one of his professors in teaching school informed him that there was an opening at Palo Alto High School in environmental science, which would be his first full-time teaching job — he soon connected with Paly administration and interviewed for the position. But to Kearns, the logistical details are irrelevant.

“What matters is that this came together at the right moment,” he said. “I decided to become a teacher because I felt a calling, from a higher power, and I finally had the opportunity to follow that voice.”

Kearns keeps a folded envelope in his pocket, scrawled with the quote, “May God give you entrance to the hearts of those you teach, and then make you know that as you enter there, you stand in holy places.” His teaching philosophy, he says, is to imbue his students with a sense of respect and reverence for the natural world by keeping his class lighthearted and enjoyable, and relating environmental science to their daily lives. As the final assignment for his class, students created chalk drawings with slogans underscoring the importance of preserving the natural world.

“He’s very interested in active learning, and having his kids get out and experience the environment,” said science department instructional supervisor Kelli Hagen about Kearns. “Whether it’s on-campus field trips, which he’s done a lot of, or off-campus, he wants his students to be engaged.”

Junior Mason Wittman, one of Kearns’ students, echoes this sentiment, underscoring Kearns’ commitment to instilling an admiration for the outdoors in his students. “It’s not just in the classroom,” Wittman said. “We get to go out, and I’ve really developed a passion for environmental science. I might even pursue it.”

But Kearns himself has realized that his style of education may be at odds with certain perceptions of the community’s tradition of academic rigor. “I sense an academic intensity here,” he said. “It’s been a challenge to reconcile that.”

Kearns brings with him an extensive background in ecology — he’s worked as a wildlife biologist and for the Environmental Protection Agency. His career has taken him across the world, to the Mojave Desert, the Alaskan glaciers, East Africa and Japan. The plains of Kenya and Tanzania, in particular, hold a special place in his heart.

“The landscape was my favorite part,” he said. “Sitting in the Serengeti — which means endless plains, it just extends forever, as far as the eye can see — and watching a lightning and thunder storm. Images like that were my favorite — just taking everything in and being in awe.”

His specialties as a wildlife biologist, Kearns says, are the small carnivores of Africa and birds of prey. “If anyone has a question about mongooses or raptors, they can ask me,” he said with a laugh.

Though Kearns, as he describes it, lives and breathes environmental science, he also has an avid interest in sports.

“I played football, basketball, rugby, volleyball, beach volleyball, martial arts, swimming, you name it,” he said. “That’s actually how I got to college, on a football scholarship. I’ve coached on and off for the last ten years.”

Kearns is very much a family man: he is married, with a 15-year-old daughter and a 1-year-old son.

“Spending time with them is mucho, mucho divertido,” he said, invoking a bit of Spanish. When asked about his foreign language ability, he said he knows a few words of Swahili, Tongan — he played on a Tongan rugby team — and Japanese.

He keeps mementos from his cultural experiences, and on his first day of teaching at Paly he brought in two: a warrior’s club and a lion’s tooth, given to him by a nomadic Maasai tribe in the Serengeti.

“To become a Masaai warrior, you have to kill a lion,” Kearns said. “It’s not about animal cruelty. It’s about demonstrating that they can protect their family and their tribe.”

As the school year draws to a close, Kearn’s future at Paly remains uncertain — his teaching contract with the district goes only through this academic year — but he has clearly earned the respect of many his students. It’s no easy task to stand in as a replacement for a teacher, particularly one who was so universally admired, but according to Wittman, Kearns has done so seamlessly, bringing his own experiences into the fold while maintaining the buoyant, optimistic spirit that has characterized this class.

“I think Paly did a great job,” Wittman said. “They probably found the best possible replacement. We all loved Mr. Scott, but I think everyone loves Mr. Kearns too.”

And without a doubt, that appreciation is reciprocated, says Kearns. “Let me put it this way,” he said. “I am living the dream. This is my dream job.”