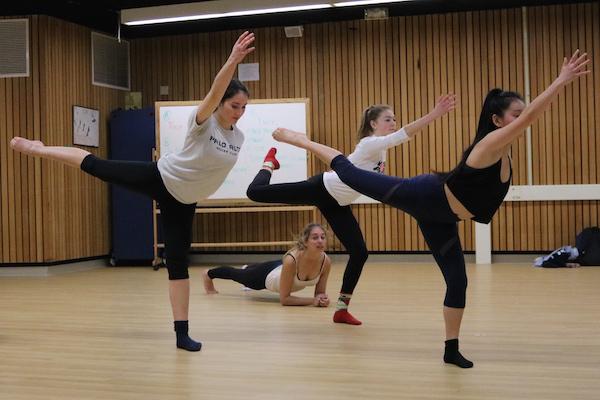 The Palo Alto High School dance team will be competing at the United Spirits Association national competition this weekend at the Anaheim Convention Center in Los Angeles.

According to head coach Alanna Williamson, this is the first year that the Vikings’ dance team has competed in regional and national competitions, so it is still learning how to prepare.

“Something that we’ve learned this year, since it is our first year competing, is that the way that other high schools dance on the teams is different in terms of skills than what we’re used to,” Williamson said. “We’re really well-rounded in terms of skill and have such a high level of ability on our team and all of our girls are in outside studios, but it’s something new so we’re trying to really ramp up and prepare for that.”

Despite a disadvantage due to lack of high school dance competition experience, the dancers have been practicing all year, according to Williamson.

“It’s been a really long preparation period,” Williamson said. “We have practice twice a week, and since January, it’s been more than four times a week. We basically just clean and run the dances over and over again until they are ready to perform and ready to compete.”

According to senior captain Melanie Guan, the team has prepared for the intense competition to come.

“The team has been working hard and going to practice almost every day of the week,” Guan said. “It’s been hectic but I think we are well prepared.”

The team will perform five group dances, according to Williamson.

“We are more selective with the competition routines,” Williamson said. “We had everybody on our team audition for the pieces in December and we selected from that.”

Senior captain Emma Sternfield is looking forward to see her teammates rise to the occasion and make the amount of practice and time put into this competition show in their performances.

“I’m looking forward to seeing people on the team dance their hearts out and realize that all of our effort was worth it,” Sternfield said.