You are so not OCD: The truth behind the colloquialism 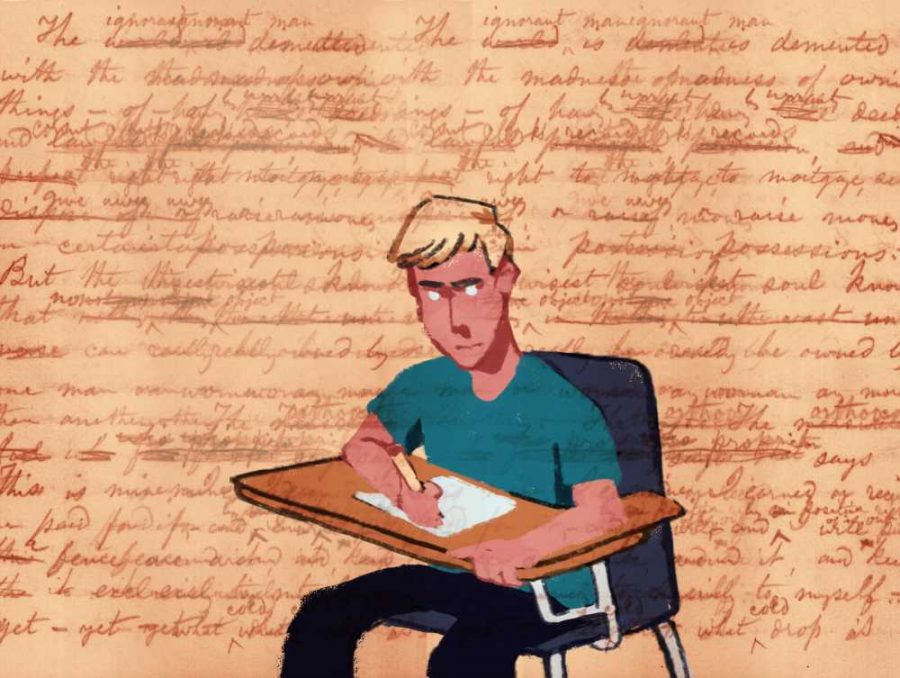 Envision sitting in your history class and taking notes on your teacher’s PowerPoint lecture on India. As you copy down the word ‘Buddhism,’ you notice that the ‘h’ is slanted. Compulsively, you erase the word and rewrite it, only to erase it again because now the ‘d’ is smudged. Soon, your brain repeats the word ‘Buddhism’ over and over, and you find that you are unable to pay attention to the lecture. As this all transpires, you come to realize that not only have you missed the remainder of the Buddhism slide, but the following slide as well. For sophomore Darrow Hornik, these nettlesome compulsions are a result of obsessive-compulsive disorder.

“My OCD really depends on how my day is going; if I am more stressed out, my OCD is worse,” Hornik said. “When I am in a happier mood I don’t get it as much, and writing becomes a lot easier, as I am not as affected by the symptoms. The whole OCD stereotype where everything has to be super neat — that is a part of it, and I do get that as well, but there are multiple other symptoms.”

Hornik has publicly expressed her personal journey as a student with OCD. Her talk titled “Where are you going?” was part of TEDx Palo Alto High School’s third annual conference on March 26. Despite recent examples of online public discussion pertaining to mental illness, with Gunn High School’s student newspaper The Oracle publishing a Changing the Narrative series aimed to spread personal stories and a guest column on Palo Alto Online, many continue to misconceive the terms and phrases often used in casual conversation.

According to Lorrin Koran, M.D., a Stanford University professor of Psychiatry and Behavioral Sciences, obsessive-compulsive disorder is characterized by the presence of obsessions — anxiety-inducing thoughts, images or urges that a person finds difficult to dismiss from his or her mind. The obsessions lead to compulsions — behaviors that are designed to either reduce the anxiety associated with the obsession, or prevent a detrimental outcome if the person does not follow his or her obsession.

“A person with OCD might be afraid that if she leaves her house and does not check the stove, there will be a fire while she is gone, leaving her responsible,” Koran explains. “Consequently, she will check every knob on the stove. Then, she may think that she did not check correctly, so she checks them again. She might spend five or 10 minutes checking the knobs on the stove to make sure they are off before feeling comfortable leaving the house. The obsession is the possibility of a fire and she will be responsible, while the compulsion is frequently checking the knobs.”

According to Koran, OCD affects 1 percent to 2 percent of the population. One out of every three patients is diagnosed with OCD between the ages of three and 15; a third of the time the diagnosis occurs between 15 and 25, and the final third of diagnoses occur between 25 and 35 years old. The brain of a patient with the disorder clearly showcases physical changes.

“OCD from a psychiatric standpoint is a mental disorder in which there is a chemical imbalance within the brains of those diagnosed,” Koran said. “It’s a disorder rather than a disease because diseases are things we know the cause of. Disorders are pathological conditions that we don’t know the cause of and an illness is a disease or disorder as experienced by the patient.”

Although a definitive cause for obsessions has not been found, research has shown that its presence is related to genetics. However, exposure to particular environments can, at times, also cause OCD. According to Koran, manganese miners have been known to develop the disorder and occasionally, children who have had a strep infection suddenly develop OCD a few weeks later.

According to Koran, modern medicine has found two treatments to be most effective: a class of medicine known as selective serotonin reuptake inhibitors and psychotherapy in the form of exposure and response prevention. Not all patients benefit from the prescribed methods of treatment, as 40 percent of those diagnosed will not improve after a first trial of SSRI medications; however, many of those failing to respond to initial treatment benefit from a second or third trial.

‘I’m so OCD’ has become all too familiar of a phrase, ingrained in speech to justify moments in which one feels the need to perform an action in a certain way. Consider Buzzfeed, a social news and entertainment company that frequently amasses views through articles such as “33 Meticulous Cleaning Tricks For The OCD Person Inside You” and “19 Things That Will Drive Your OCD Self Insane” or the numerous hashtags that have emerged: #ObsessiveChristmasDisorder and #ObsessiveCrossfitDisorder. People have learned to use the disorder as a colloquialism.

Not only do such articles trivialize OCD and its effects, but they equate everyday “obsessions” with the disorder. Because “obsessive” is a personality trait and does not impair functioning, the mental disorder is being mixed with a personality preference. Knowing every lyric to “Hotline Bling” within days of its release is not remotely similar to the irrational need to flip a light switch an even number of times before exiting a room in order to prevent something bad from happening to a loved one. When ‘being so OCD’ is correlated with words such as ‘neat’, ‘picky’ and ‘organized’, it strips the serious mental illness of its harsh reality.

“The thing is, everybody assumes that people with OCD are neat freaks or germaphobes,” Hornik said. “That isn’t true. Sure, it’s a fragment of OCD, but it is wrong to characterize that as the entire disorder. The average person is aware of and recognizes the term OCD; however, I don’t think they know what OCD is and its detrimental effects it can have on a person’s life.”

The misuse of the term ‘OCD’ leads to misunderstandings revolving around the mental disorder itself. In fact, when people use OCD to describe themselves, they are also forgetting OCD is not an adjective and that a person cannot be OCD, but rather a person has OCD.

“If you ask somebody ‘Have you heard of OCD?,’ they would say ‘Of course I have,’” Hornik said. “However, most are probably not aware that OCD is actually a chemical imbalance in your brain.”

Delving further into the issue

But why does society consider it inappropriate and abnormal to say, “I am so cancer,” while accepting the analogous statements when “cancer” is replaced with “OCD,” “depressed” or even “retarded”? The answer? The stigma around mental illnesses.

According to World Psychiatry, which describes itself as the leading informational center devoted to the diagnosis, prevention, study and treatment of mental disorders, a majority of people hold negative attitudes and stereotypes about diagnosed patients. These people go through life hearing stereotypes such as ‘people with mental illnesses are scary and violent.’ As a result, people diagnosed with a mental disorder may be denied opportunities in everyday life, including jobs, housing and health care.

“I don’t think that anyone should be ashamed to have a mental illness,” Hornik said. “The stigma that is created around mental illnesses is affecting so many people’s lives.”

Jonathan Frecceri, Paly’s Mental Health and Wellness Coordinator, expanded upon the notion that a significant distinction has developed between physical and mental health, when in reality the two are equally important.

“Physical health and mental health are all apart of overall health,” Frecceri said. “We live in a society where there is still kind of a taboo around mental illnesses, which is kind of absurd because the brain is a physical part of the body and that’s where mental illnesses live. However, we are making progress and the first step is to really raise awareness.”

Hornik, who has been ashamed to tell her friends that she routinely visits a therapist, stresses her experiences with the negative stigma around the disorder.

Frecceri emphasized that a way to end the negative stigma surrounding mental illnesses is for individuals to be aware of the language they use and its effects on diagnosed patients.

“I think it’s an opportunity for all of us, as a part of a community to continue to educate people, not to shame people, but to acknowledge that there are people who suffer from something very real and such phrases should not be used loosely,” Frecceri said. “I think the problem is for individuals that do have a diagnosis, it [colloquial use of the illness] can feel very pejorative, that it’s being used at their expense, even if it’s not being used against them.”

Since only 1 percent to 2 percent of the population suffer from OCD, understanding the complexity of the disorder can help foster a community of support and stop individuals from suffering in silence.

So the next time your impulse is to say that you are ‘so OCD’ about something, or hop on the bandwagon that is the newest social media trend, remember that #YouAreSoNotOCD.