Paly and Gunn to face off at upcoming night rally 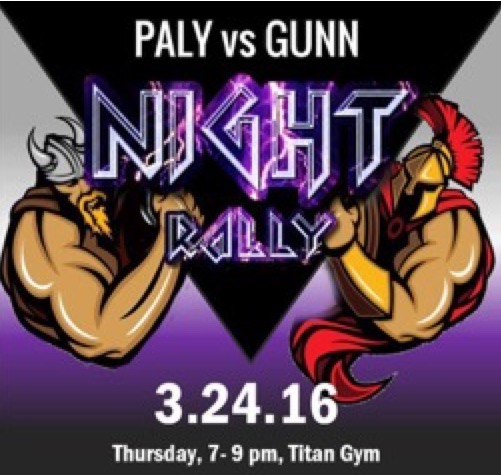 ASB and SEC created a promotional video to advertise the rally for students, which will feature a relay race, a staff-student volleyball game and performances from both the Gunn and Paly dance and cheer teams.

Friedlander said that the rally will be a friendly competition between cross-town rivals.

“It should be a lot of fun– a friendly competition with our cross town rivals and competition against the staff,” Friedlander said. “I’m hoping that Paly kids come out so we can prove exactly how loud we are.”

Both Paly and Gunn cheer and dance teams will be having a joint performance, featured at the end of the volleyball game.

“Cheer and dance from both schools will be performing in a joint performance,” senior Spirit Commissioner Reid Walters said. “It’ll be a special performance made just for the rally.”

“We wanted to plan an event that included both schools,” Hong said. “Especially because Cupertino schools have IDC rallies—we wanted to do something based off of that to see if we could create a more positive bond between both schools.”

T-shirts for the rally are being sold on the Quad at brunch and lunch. Walter encourages students to purchase shirts to show their support during the rally.

“We’re selling t-shirts on campus $10 for Short Sleeve and $15 for Baseball Sleeves,” Walter said. Let’s show up rocking our spirit, so come out and get your t-shirt soon, Paly.”