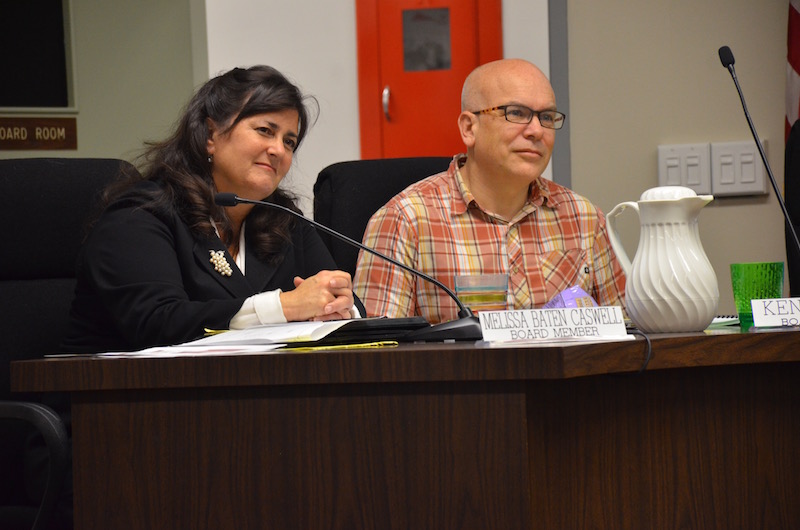 School board members Melissa Caswell and Ken Dauber listen to teachers from Addison Elementary during the open forum. The staff addressed how the donation would benefit students. Teachers hope the monetary funds will create more space on campus.

After several anonymous monetary donations were made to schools in the Palo Alto Unified School District, conflict is arising on the policies of the identification of donors. The PAUSD Board of Education discussed possible changes to the policy in accepting gifts and anonymity of district donors last Tuesday at the district office, favoring a policy that encourages donor identity to be revealed to the public.

According to the district website, board Policy 3290 for the acceptance of gifts, grants and bequests requires the board to consider its purpose in comparison to the district’s vision, whether the funds would be depleted prior to completion of the program and whether they would imply district endorsement of a company.

A $17 million anonymous donation for a construction project at Addison Elementary School caused school board member Melissa Baten Caswell to propose a policy change, similar to that of Stanford University, that would allow members of the district to be privately aware of the identity of the donors.

“If the donor is anonymous, it seems like it would be a good idea that somebody in the district knows who the donor is,” Caswell said. “This allows confidence that there are no strings attached. I’m thinking [that the] superintendent and legal council [would be notified of who all donors are].”

The construction at Addison will be a general remodel, including a new library and administration building.

According to board member Ken Dauber, disclosure of the identification of donors to the public should be encouraged by policy, but not force.

“I think that we should encourage, but not require, that donors, especially of substantial amounts, be known to the public because this upholds the district’s values of transparency,” Dauber said.

Board member Camille Townsend expressed the need for an easily accessible and friendly process for donors, that promotes donations while expressing the district’s gratitude, rather than forcing identification of donors who wish to remain anonymous.

“I feel like we’re hammering people in a way that doesn’t feel good,” Townsend said. “I need to see a policy that reflects our gratitude. I want to make it an easy process for people to be able to give us money.”

Addison Principal Amanda Boyce and teachers at the school attended the meeting to express their support of the project and its goals.

Caswell went on to emphasize the importance of accepting donations aligned with district visions and values.

“To me it’s very important that any donation we accept is consistent with [district goals],” Caswell said.