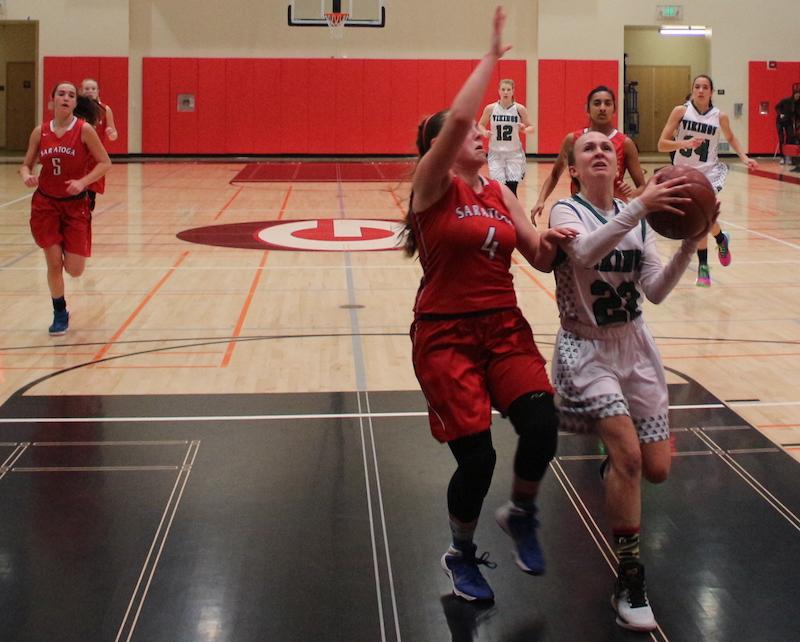 Senior guard Maddy Atwater drives to the basket against Saratoga in a regular season matchup on Feb. 2 at Gunn High School. Photo by Sam Lee.

After finishing strong in league – winning seven out of their last eight regular season games – the Vikings went into the postseason as the No. 1 seed in their league.

The Vikings are prepared going into the game, according to junior guard Lauren Koyama.

“We developed a game plan after watching film [Piedmont’s previous game],” Koyama said. “We practiced a lot of defense and moving the ball on offense.”

The Vikings are currently ranked 64th in California, according to MaxPreps.

The Vikings feel sanguine after the win against Cupertino, according to sophomore guard Carly Leong.

“I feel confident and we have some momentum from Cupertino and hopefully that carries to the game tonight,” Leong said.

If the Vikings win tonight, they will move on to play the winner of the semifinal game between North Salinas High School and Silver Creek High School in the Division I CCS championship game. The time and place have yet to be announced.