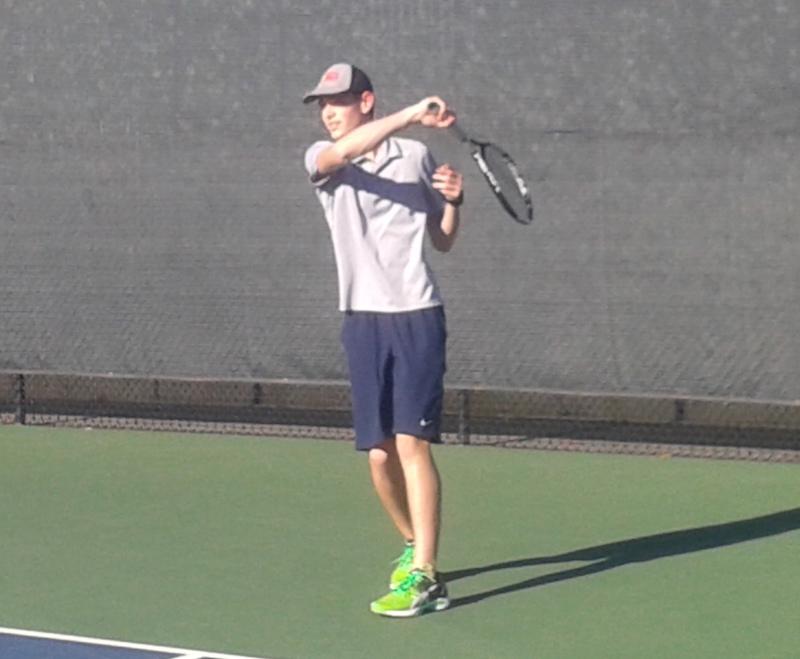 Junior Henry Badger rallies with his teammates during a practice. Badger believes that the team can overcome its youth to succeed this season.

The Palo Alto High School boys’ tennis team will look to be competitive in the De Anza league despite a young team with many underclassmen.

According to head coach Andy Harader, the team’s main goal this season is to develop its youthful team.

“This year is more kind of a developmental season,” Harader said. “We have a lot of new good freshman players on the team, and we want to develop them and look to some good years in the next five.”

Harader said that the team will benefit from being in a very strong division this year.

“The good part [of being in a strong division] is that we will play a lot of good teams, but the bad part is that we won’t have a very good record,” Harader said. “We are more interested in developing what we got.”

Junior Henry Badger said that despite the youth, the team has high hopes for the season after going 10-10 overall last season.

“I would say our team goal is to stay in our league,” Badger said. “Our league is extremely tough, and we all are working to do the best we possibly can and maintain our standing. I would also say our goal is to make CCS [Central Coast Sectional playoffs] this year because we unfortunately barely didn’t make it last year.”

Senior captain Shiv Matta echoed Badger’s sentiments and said the team can succeed and achieve its goals as long as it continues to work on its game.

“We just have to keep working and keep grinding,” Matta said. “We’re right on the cusp of being really solid and I think with a couple wins we’ll get the confidence we need to be a good team.”

Matta, who suffered a concussion in a skiing accident a few weeks ago, hopes to get on the court soon and thinks that the team can make up for his absence.

“I was hoping to be back this week, but that didn’t happen,” Matta said. “I’m shooting for next week but concussions are dicey and I don’t know when exactly I’ll be back. We have a solid team so I think they’ll do a great job holding down the fort until I come back. I believe in the team to just fight hard and compete well, regardless of whether I’m playing or not.”

Harader said that this year the team will work on improving their serve-and-volley game, which emphasizes quick points using big serves and quick subsequent volleys.

“We are working a lot on serve-and-volley this year,” Harader said. “I told the freshman guys that ‘we are going to work on this every week. I don’t expect you to perform well at it but I want you to learn it so by the time you are juniors you are going to be really adept at this.’”

Matta says that the team can overcome its inexperience and triumph this year.

“It is a young team,” Matta said. “But I think we’re poised for success this year.”