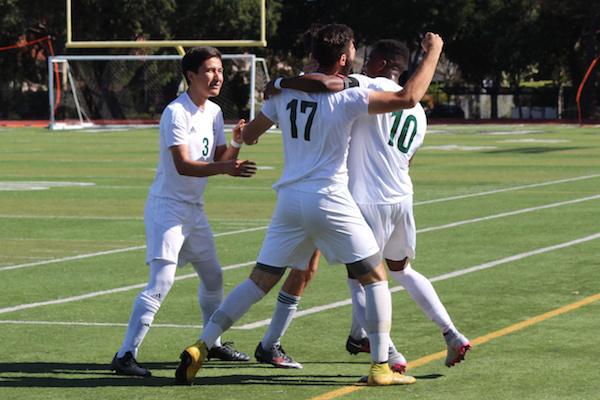 Paly’s last match was heart-wrenching, as the players’ intensity flew off the charts in their first loss of the season. With a red card given to senior midfielder Roberto Sotelo halfway through the first half of the game because Sotelo blocked a shot on goal with his arm, the Vikings battled the rest of the game with 10 players on the field rather than 11. Although the score did not reflect their spirit, the Vikings’ performance held strong throughout the game, according to junior captain and center defender Neil Verwillow.

“I was really proud of our effort today,” Verwillow said. “We went down a man early on today, which is hard to handle, but we bounced back and played with our hearts. Wrapping up this way doesn’t do the season justice.”

Despite having one less person on the field, the team fought through the entire game, according to head coach Don Briggs.

“It [the red card] made it so we had one less guy up top to go to, and made it really hard to create an offensive attack,” Briggs said. “It was hard, but we scored a couple of times and they were taken aback.”

After starting the game on a low note with an early goal from the Wildcatz, Paly fought back and finished a remarkable play for its first goal of the game halfway through the first half. Senior captain and outside midfielder Cole Tierney sent a cross from the right corner across the field to senior forward Ariya Momeny, who headed the ball to equalize the game at 1-1. Watsonville later regained the lead with a penalty kick goal.

At the end of the half, senior captain and goalkeeper Eli Friedlander fouled a Watsonville player in the penalty box and was given a yellow card. Junior forward Michel Ange Siaba substituted in for goalkeeper for the penalty kick, which he saved from going in, ending the first half 2-1.

Three yellow cards were given to various Watsonville players during the second half. With stakes running high, both teams held strong defensively, until a Watsonville defender fouled senior midfielder Siddharth Srinivasan in Watsonville’s penalty box, giving the Vikings a penalty kick, which Verwillow scored. The second half ended with a score of 2-2, which by CCS rules, moved the game into two 10-minute overtime periods.

In overtime, both teams missed several opportunities to score, but the Wildcatz’s senior captain and defender Anthony Orendian scored off of a corner kick play, the only goal of both overtime periods, effectively ending the Vikings’ season.

Watsonville head coach Roland Hedgpeth recognized the Vikings’ resilience as well as his team’s need to improve on capitalizing on scoring opportunities.

“We missed a lot of opportunities on our penalties, and that’s what I thought our strength was gonna be,” Hedgpeth said. “Palo Alto played well, especially down a player, but we just kept the pressure and kept it going.”

The Vikings’ performance throughout league is a much better representation of their ability, according to senior captain and goalkeeper Eli Friedlander.

“Coach [Briggs] always says that CCS is the cherry on top, but league is the sum of the entire season and how well we’ve been playing,” Friedlander said. “We had an undefeated season coming into today. I don’t think the result showed what our team can do. The game did show that we are a second half team. We played 80 minutes with a man down, and we left it all on the field.”

The team has 11 seniors on the roster, so the match was the last of many players’ games in a Paly soccer jersey, which made it especially hard to end the season with a hard-fought loss, according to Friedlander.

“It’s definitely very emotional,” Friedlander said. “It’s not the way I wanted to end my career at Paly, but it is what it is. I’m excited to see what the guys do next year.”