‘Macbeth’ brings an eerie tragedy to life on stage 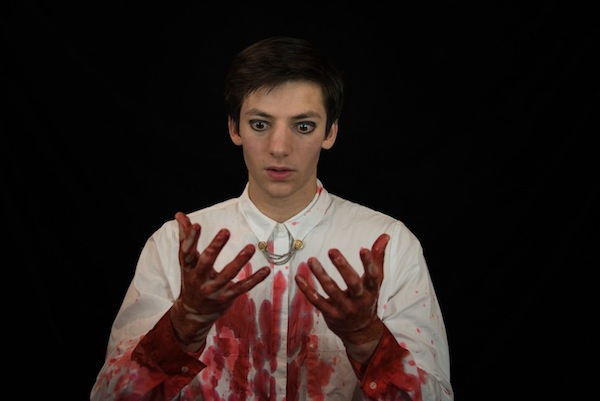 Shakespeare’s plays have long graced the stages of the world, from bittersweet tragedies to upbeat comedies conveying timeless messages about humanity and society. The Palo Alto High School theater department brings a new twist to Shakespeare’s tragedy “Macbeth” with interesting props and a modern setting. “Macbeth” captivated its audience on its Friday premiere through Shakespearean monologues that came to life with light-hearted side characters, a creepy setting and superb acting.

The play revolves around Scottish official Macbeth (senior Ophir Sneh) and his ambitions to rule over Scotland. After three witches visit Macbeth and his acquaintance Banquo (junior Jackson Kienitz) and disclose prophecies of Macbeth’s future rise to king, Macbeth is crowned Thane of Cawdor as the previous title holder is charged with treason. Lady Macbeth (senior Clara Baker/ junior Zoe Sego) convinces Macbeth to follow his royal ambitions by killing King Duncan (senior Daniel Cottrell), which sparks a series of tragedies as Macbeth rules over Scotland with an iron fist.

The costumes and makeup are not only well-done, but emphasize the creepy aspects of the twisted tale. The three witches sport smudged black faces, tangled hair and oversized rags that highlight their gaunt and crazy personalities. Their leader Hecate (junior Nadia Leinhos) exudes power and danger in a long black coat and leather pants, contrasting well with the ragged witches. When three murderers swagger onto the stage, their evil is represented by horrific black makeup and ripped clothing. The nobles, from Banquo to Macduff, fit in with the idea of a modern Scotland in sleek suits and army medals. King Duncan even wears a kilt, much to the delight of the audience, in one of the scenes.

Macbeth’s transition into madness is reflected in his clothing and makeup. Tousled hair and red suits that turn into bloody army clothes mimic his dynamic character. The use of fake blood makes the fighting scenes and deaths life-like rather than overly gory. Furthermore, the clever knives hide fake blood that leaks whenever a character is stabbed.

The technology and props in the play are impressive and complex. A news report is projected onto the stage in the beginning of the show, adding a light-hearted tone with the hilarious pictures that indicate how the play is set in modern Scotland. However, the majority of the setting and props fit in with the eerie and grisly undertone of the play. When a fake head is held up in the bloodier scene, the sight is enough to make one recoil. Fog often rolls onto stage, and a siren wails between scenes to make transitions interesting. Red lights add an ominous tone to mystical scenes with witches and hallucinations, while characters use flashlights to show how nighttime is creeping in. When it comes to visions, the bloody ghost of Banquo washed over in red light and children creepily reciting prophecies like puppets are impeccably done. The witches’ cauldron, in the form of a shopping cart, even uses dry ice so it seems like an actual potion is being made.

While the performance was three hours long, the play keeps the viewers actively engaged through comedic moments and some audience interaction. A drunken porter (senior Matthew O’Reilly) elicits laughs as he stumbles over chairs, lamenting about life to the backdrop of a knocking door. He even stumbles into the audience, walking on people’s chairs and making the play more interactive. In addition, actors consistently move throughout the aisles donning tree branches or flashlights, making the audience feel as though they are a part of the play.

“Macbeth” combines stellar acting and intricate technical aspects to create an overall exceptional performance. The audience easily connects with each character’s plights, and comedic moments juxtapose dramatic and well-acted monologues detailing death, drama and deceit. In addition, sensational music, tense duels, and detailed props and sets create the perfect Scottish backdrop on which to base the play. “Macbeth” did justice to the final large-scale play of the Haymarket Theater.