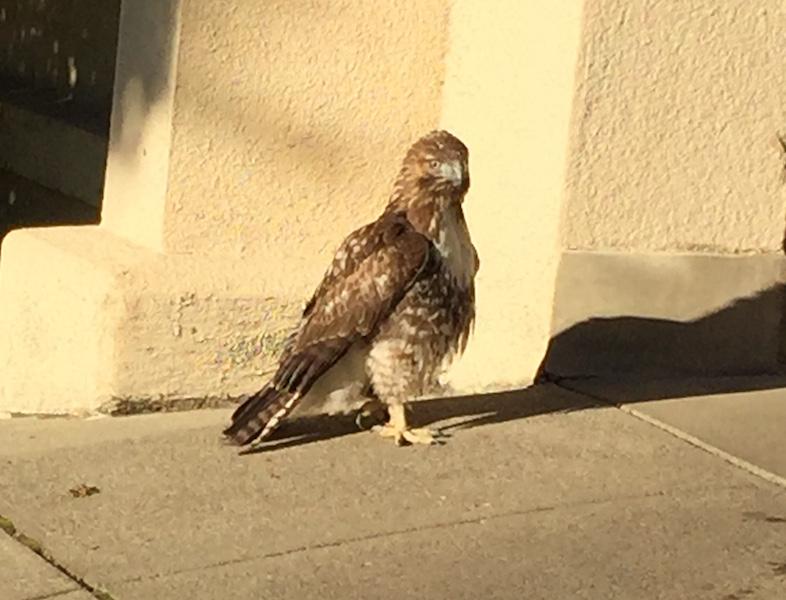 Animals services responded to the Paly administration's call about an injured Cooper's hawk on campus. Photo by Paul Kandell.

The avian life at Palo Alto High School is usually limited to seagulls, pigeons and a few smaller birds, but today, the campus had an unusual visitor — a hawk.

Journalism teacher Paul Kandell was the first to spot the bird, later identified as a Cooper’s hawk, limping in the walkway between the tower building and Haymarket Theatre at around 8:30 a.m. Campus supervisor AJ Castillo, called over to the scene by Kandell, notified front office secretary Jennifer Gardner, who then placed a call to Palo Alto Animal Services.

Upon arrival, Palo Alto animal control officer Ken Cunningham laid a blanket over the hawk and carried it to his vehicle, Castillo said.

According to Cunningham, the bird had sustained an injury to its left talon.

“Cooper’s hawks tend to be fractious, but he [the hawk] was so weak that he didn’t resist when I picked him up,” Cunningham said. “He was traumatized, so we kept him covered completely to sedate him.”

Cunningham explained that Cooper’s hawks are more prone to injury than their close relatives, red-tailed hawks, because they hunt from lower altitudes and make quicker movements.

“When the bird is successfully rehabilitated, they [the Humane Society] will bring it back to where it was found, near the high school,” Cunningham said. “It’s not going to be sent off to a zoo.”