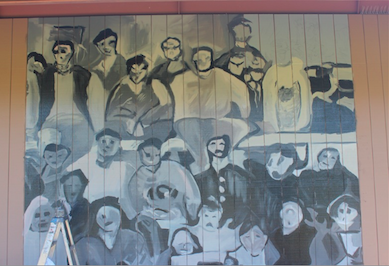 Because of its dreary aspects, maintenance painted over a mural depicting students reading Paly’s newspaper, the Campanile, according to Paly Principal Kim Diorio.

“Given what our community went through last year with the student suicides, I think that there were some people who felt that this mural gave a ghoulish kind of effect,” Diorio said.

The Paly Visual and Performing Arts Department plans to add new murals to the campus, partly to replace the piece removed yesterday.

“We’re hoping to put up something else up in this space that is painted by Paly students,” Diorio said.

According to Diorio, Franco was previously notified that his painting would be removed.

“We told Mr. Franco at the time when he painted the murals that they were temporary and we would eventually paint over them,” Diorio said.

Sophomore art student Annie Zhou says she looks forward for the opportunity to showcase students’ work and says she understands why Franco’s piece was removed.

“From what I’ve heard, not that many people loved his mural,” Zhou said. “Paly should give the students the opportunity to paint some murals.”

According to Diorio, Franco’s other artwork, including the second Student Center mural depicting a football game, will not be removed.

Franco, a Class of 1996 graduate, based his paintings and murals off of Paly yearbook photos. He painted the Student Center murals in 2014 and donated other various art pieces to Paly.

“We’re very appreciative for all the artwork that he’s donated,” Diorio said.