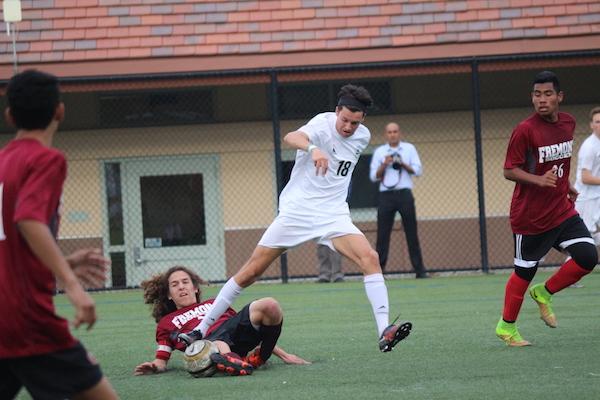 The Palo Alto High School boys’ soccer team (14-0-4, 8-0-3) took down Fremont High School (3-9-5, 2-6-3) 4-0 on Wednesday for a Senior Night victory, securing the De Anza League title and a spot in the championship bracket of the Central Coast Section playoffs, still remaining undefeated. The Vikings also played their final game of the regular season yesterday at Santa Clara; securing their undefeated status with a 2-0 win over Santa Clara High School (6-7-3, 3-6-2).

With two goals in each half of the Fremont game, Paly dominated possession of the ball throughout the game and took advantage of scoring opportunities. The team remained defensively strong and did not let Fremont have many opportunities to try to score.

The Vikings raised their level of play to achieve what they have worked for throughout this season despite setbacks, according to junior captain and defender Neil Verwillow.

“What makes our team great is that we are always trying to progress,” Verwillow said. “Every game and every practice we step up, and I think we did really well seeing as so many of us have gotten injured these last few weeks.”

The Vikings had struggled in recent weeks with multiple tied games, but the team earned its win over Fremont, according to senior midfielder Siddharth Srinivasan.

“We played very well,” Srinivasan said. “We clinched league today and I think we played solid all the way through the game.”

According to senior captain and goalkeeper Eli Friedlander, winning the league title came as a result of all of the work the players have put in throughout the season.

“It feels great [to win league],” Friedlander said. “We’ve been working on this all season and league sums up the entire season so far. I think we did well to deserve this.”

With one game left in the season, the the Vikings are looking to maximize their wins by beating Santa Clara High School (6-7-3, 3-6-2), which will help the team be seeded higher into the CCS playoffs. According to head coach Don Briggs, winning league means that the Vikings will be placed in the championship bracket for the CCS playoffs.

Moving forward, the team will be experimenting with different formations, according to Briggs.

“We’re going to try to change our formation,” Briggs said. “We’re doing that so that we can really push up offensively.”

The Vikings finished the season undefeated with a glowing record, and are currently working towards a CCS win.