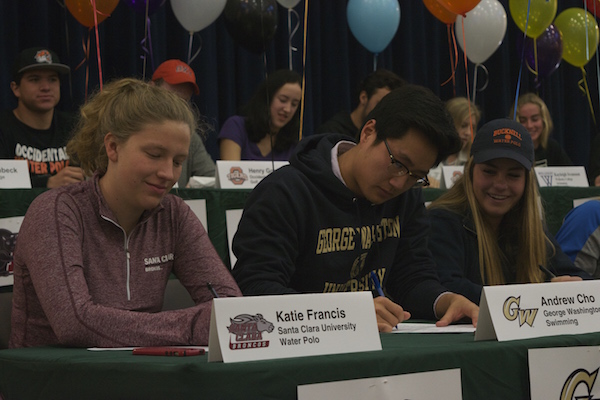 Eighteen Palo Alto High School senior athletes are preparing to take on college athletics, as they signed their letters of intent on National Signing Day on Wednesday in the Media Arts Center.

“The weeks and days may be long, it can be a grind, but just remember that the years will fly by,” Liang said. “Enjoy the journey. It’s one that not many kids get to experience.”

Liang credited Paly for preparing students, academically and otherwise, and offered some helpful advice to the college-bound athletes.

“Paly has prepared you extremely well for this [being a college athlete],” Liang said. “You should continue to use the skills you have learned over these your four years and apply them in college. There will be ups and downs, just like there were in your four years here.”

According to Givens, who will be playing Division 1 football at Southern Utah University, this day served as an affirmation to his dedication to athletics throughout high school.

“I have worked so hard for this,” Givens said. “From coming to school at 7 a.m, to just working out to get bigger and stronger, to giving it 110% during practice. Even if I didn’t get an offer, I know that I worked hard enough to get one. This is an amazing feeling and I’m really glad that this happened to me.”

Not all of the Vikings who signed to a college will be competing in Division I athletics. Kayleigh Svensson, who will be attending Wellesley College for Division III swimming, is looking forward to the experience, but does not want it to dominate her academic career.

“I’m just focusing a little bit more on school, but I’m still very, very excited to swim,” Svensson said. “It should be a fun four years.”