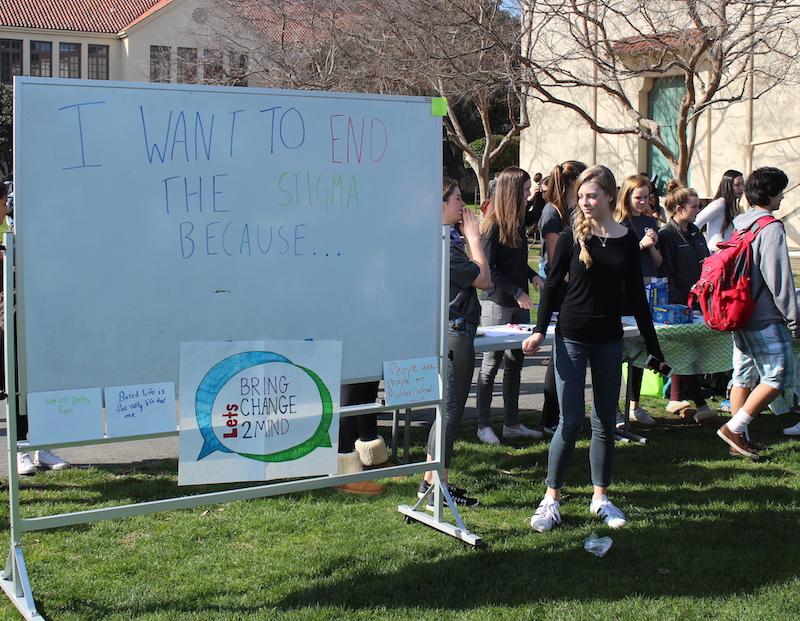 "Bring Change 2 Mind" hosts an event during Club Day 2, letting people share their opinion on how to end stigma. Photo by Sam Lee.

A new student club is hoping to bring an end to mental illness stigma at Palo Alto High School.

The club, called Bring Change 2 Mind, was founded by three Paly students, seniors Bryn Carlson and Joseph Kao and freshman Lia Salvatierra, with the goal of creating awareness on the subject.

“We each, for our own reasons, felt that something needed to be done on our campus to address mental health,” Carlson said. “This club sprang up because we have a vision that mental health will be considered no different than physical health, that people will feel comfortable talking about mental health and will feel no hesitation in seeking help for themselves or a friend who is suffering.”

According to Carlson, Bring Change 2 Mind is a national organization with the goal of ending the stigma.

On Friday during Club Day Two, the club hosted an activity in which students could write about why they want to end the stigma or how they hope mental health will be viewed in the near future. Carlson was very pleased with how the activity went.

“The goal of this activity is the same as our club’s overall goal: to get people talking about mental health and to create a space for people to open up about it in order to diminish the stigma,” Carlson said. “I am pretty pleased. We had a bigger turnout than I was expecting so that was exciting.”

Carlson hopes that the club’s message can reach more people through the events it plans to host in the near future.