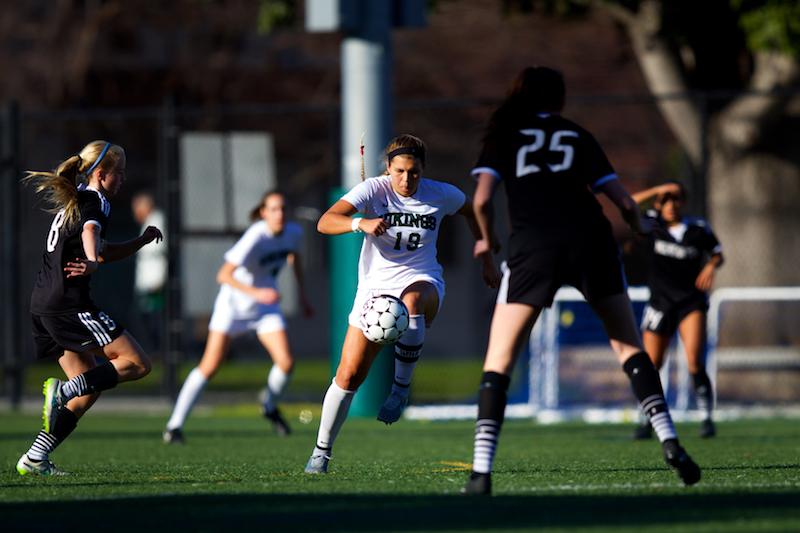 Senior Jacey Pederson (19) weaves through the Mountain View defense. Pederson was sidelined with a hamstring injury early in the second half in the Viking's loss.

Making the loss even more stinging was the fact that two of Paly’s biggest stars, seniors Alison Lu and University of California, Los Angeles-bound Jacey Pederson, were sidelined with injuries for most of the second half. According to Paly head coach Kurt Devlin, Lu will likely recover soon but Pederson’s prognosis is uncertain.

Right off of the starting whistle, Mountain View and its forward duo, junior Natasha Harris and senior Ysa

Baluyot, pressed hard offensively, setting up two dangerous chances early that Lu skillfully cleared. But the Spartans broke through in the 10th minute, when Harris received a through ball at the top of the 18-yard box, drew Paly goalkeeper Linnea Carlstrom out of position and evaded two defenders, finding the back of the net for Mountain View’s first goal.

In the first half stoppage time, Harris sent a dangerous chip into the box that resulted in a defensive miscommunication by the Vikings. In the chaos, Mountain View’s Maddie Neidig tapped the ball through to double the Spartans’ lead.

Paly’s prolific offense, which has produced 51 goals this season, found itself stifled by the Mountain View defense. The second half looked like it would be better for the Vikings after they made tactical adjustments, including moving Lu to forward, and created several promising chances. But things quickly deteriorated when Pederson limped off the field 10 minutes into the half with a hamstring injury, and Lu came off a few minutes later with a leg cramp.

Left without two of its biggest playmakers, Paly fizzled toward the end of the half, unable to produce chances as Mountain View continued to apply pressure on the offensive end.

“We started out the second half pretty well,” Devlin said. “After the injuries, it was pretty much an uphill battle. But you have to give them [Mountain View] a little bit of credit, because they had a good game plan, and they executed pretty well.”

Mountain View’s Harris emphasized that her team’s offensive success was due to tactical improvements.

“The past couple of games, we hadn’t been able to score much,” Harris said. “Today, we played to our forwards’ strengths by playing to their feet.”

Paly junior defender Talia Malchin said that the athleticism of Mountain View’s attackers was the greatest contributing factor to the game’s result.

“It was more a matter of the individual speed and skill of the forwards, rather than the whole team,” Malchin said. “They created the most issues for us as defenders.”

“We should have been able to slot some in, with the amount of time we had possession of the ball in the final third of the field,” Tomz said.

Tomz also noted that the Vikings went in with a more defensive mindset, knowing that they only needed to tie Mountain View to maintain their first-place position in league. Despite the setback, she emphasized that the team was going to bounce back for the final stretch of league play.

“A loss is a loss, and as we talked about after the game, that happened to be an important loss,” Tomz said. “But we still have four more games to play.”

The result was particularly frustrating for the Vikings because they were looking to avenge their loss to Mountain View in the the Central Coast Section Division I championship game last year. But Tomz remains optimistic that they will have another opportunity to do so.

In their next game, the Vikings will take on Santa Clara at 3:30 p.m. on Feb. 10 at Mountain View High School. To have a shot at the De Anza League title, Paly needs to win out the remainder of its games and have Mountain View lose at least once in league play.