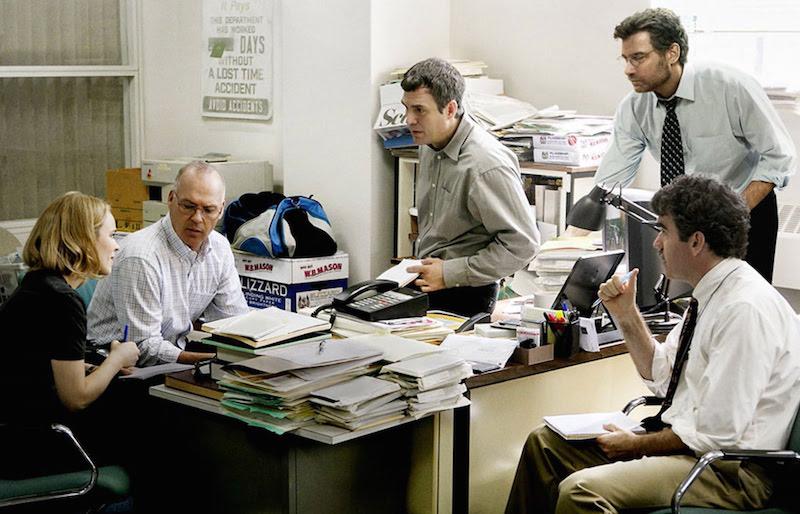 The purpose of journalism is to uncover hard truths. Sometimes stories are hidden not because people are unaware, but because they are afraid to speak. Such stories often take an emotional toll on journalists, who may face backlash from the public and those targeted by the press. The scandal with the Catholic Church, which involved the sexual abuse of hundreds of children by priests, is one such example. While “Spotlight”  encompasses stellar acting and a dramatic script, it falls slightly flat due to an underwhelming conclusion and meager character development.

“Spotlight” tells the true story of an investigative journalism team from the Boston Globe’s ‘Spotlight’ section, and how they uncovered sexual abuse cases perpetrated by religious figures nearly 20 years ago. The priests’ actions went unpunished due to fearful victims and determined Church members such as the Archbishop of Boston, Bernard Law (Len Cariou). The team encountered constant pushback from community members, especially those with strong ties to the Catholic Church.

By the time the team published the story, they had enough damaging evidence that the issue couldn’t be swept under the rug, with proof of over 100 cases of sexual abuse by priests and a strong suspicion that the system allowed such behavior.

Director Tom McCarthy maintains a fast pace with smooth scene changes that not only keeps the audience interested by the influx of information but also creates a contrast in emotions. In one scene, journalists Rezendes and Pfeiffer are both conducting interviews with victims in two different places, with two different men. The emotions of the victims’ testimonies are amplified by the scene switching from one man to the other, making it painfully clear how so few victims survive the mental strain of reliving their experiences. The camera zoomed in on faces, allowing small facial expressions to convey sadness and shame instead of just using words. Scene switches were also accompanied by a melodic, soft piano music that adds a somber tone, but at times, it is more distracting than helpful.

The constant tension in a dogged chase for information, and high turmoil of emotions comes to life with a talented cast. Walter “Robby” Robinson (Michael Keaton), the editor in charge of the Spotlight team, struggles with opposition from friends over the decision to write the story and helps provide context to the Spotlight team’s acceptance of the case. Mike Rezendes and Sacha Pfeiffer stand out among the cast, with the script placing most of its focus on their efforts to track down scandals within the Catholic Church. Their dramatic efforts to uncover a string of abuse help dramatize the plot and connect the audience to its emotional undertones. Mitchell Garabedian (Stanley Tucci) demonstrates the struggle of citizens against groups or organizations to promote justice as a strict but virtuous lawyer who was previously unable to derail the Church’s consistent cover-ups. Editor Marty Baron (Liev Schreiber), who pushes the Spotlight team to focus on the story, serves a limited yet important role and his gruff personality juxtaposes those of his fellow writers.

While all actors expertly performed their roles, character development was limited throughout. “Spotlight” offered little context to address why each character was pursuing the story and their goals in the process. In addition, the film’s large cast ensured that it was difficult to fully comprehend each character’s background, motives and desires. Other factors limited “Spotlight’s” coherency. The convoluted plot created confusion because so many names were thrown around. Much of the action was conveyed through the dialogue, so it was easy to miss the investigation’s details.

The movie raises one very important question, but never fully answered it: Why wasn’t the story covered earlier, when the scandals first occurred? Lawyers and victims told the Globe that they had sent the information years ago, but they never mentioned what had happened to it. An unclear conclusion, amplified by the final scene’s underwhelming representation of a busy office, negatively affected the movie’s clarity and the urgency of the story being written.

“Spotlight” combines a stellar cast with an intense plot to create a unique look into the world of journalism. This thriller was not only enjoyable to watch, but also informative because of the in-depth look into the Catholic Church scandal. “Spotlight” provides depth by illuminating one of the greatest challenges we face today: Shining the spotlight on issues some would rather leave covered up.

Rated: R for some language including sexual references.