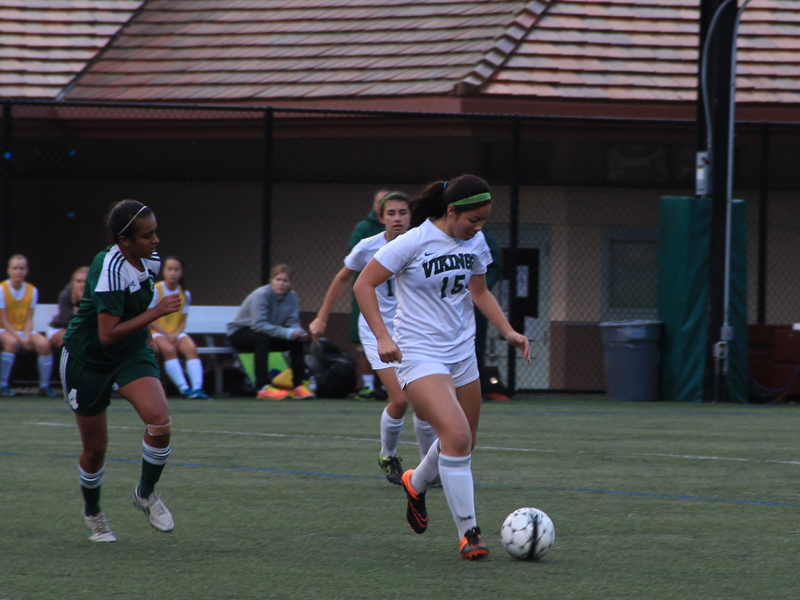 Junior midfielder Natalie Maloney dribbles the ball past defenders as the Vikings beat the Homestead Mustangs 5-0 on Friday. Photo by Ethan Kao.

After an impressive season comes to a close, the Palo Alto High School girls’ soccer team (12-0-1, 7-0-1) continues to dominate opponents with stellar offense and fluid defense, maintaining their undefeated record.

“The first half of the season has been great and I think our record reflects how the girls have been playing,” Seedman said. “We’ve continued to improve from last season and I think we will only get better.”

Both the boys and the girls soccer teams have impressed with their dual undefeated streak, winning all 30 games thus far. Girls’ are currently ranked 30th in the nation, and 12th in state according to MaxPreps.

Seedman emphasizes the team’s ability to play through adversity, due to the loss of senior left back Jacey Pederson the past few games to a national team camp.

“This week was very tough for us not only because we had three games, but we were missing our best player [Pederson],” Seedman said. “We were also playing three tough opponents with two games on the road but the girls held up well and won them all.”

As the season comes to a close, seniors Heidi Moeser, Jacey Pederson, Nika Woodfill, Alison Lu, Linnea Carlstrom, and Ansley Queen look forward to ending the season on a strong note but also to prepare the team for next season as many key players are leaving for college.

“We added 6 new players this year and they are doing an excellent job, and are really a huge part of this team,” Moeser said. “With so many of us leaving next year, I still feel confident in the strength of our team. We’ve proved drastically what we can do and we look to improve every practice, every game.”

Given the success of the Vikings, senior defender Alison Lu stresses the importance of not allowing the wins to stifle improvement.

“We have been playing well but there are definitely things we can work on,” Lu said. “There are still some communication issues on the field and we need to work on keeping possession. Improving that will really help us out. We also know the rising seniors and juniors are strong and will uphold what we’ve accomplished this season so far.”

Midfielder Emily Tomz compares this season to the last, emphasizing how they have improved.

“Compared to last season, I definitely think we have a greater chance at winning leagues and CCS,” Tomz said. “We are a really strong and talented group, with a firm defense, crafty midfielders, and fast forwards who score often and with precision. This year more than last year we have been doing more fitness, which has and will benefit us in games, helping us keep up a high endurance the whole game.”

As the second half of the season approaches, the Vikings continues to stay optimistic about the teams ability to maintain its undefeated record, and constantly looks to improve.

“For the rest of this season we are definitely aiming to continue our undefeated streak, and, of course, beat mountain view next Friday,” Tomz said.