“The Martian” leaves no space for boredom 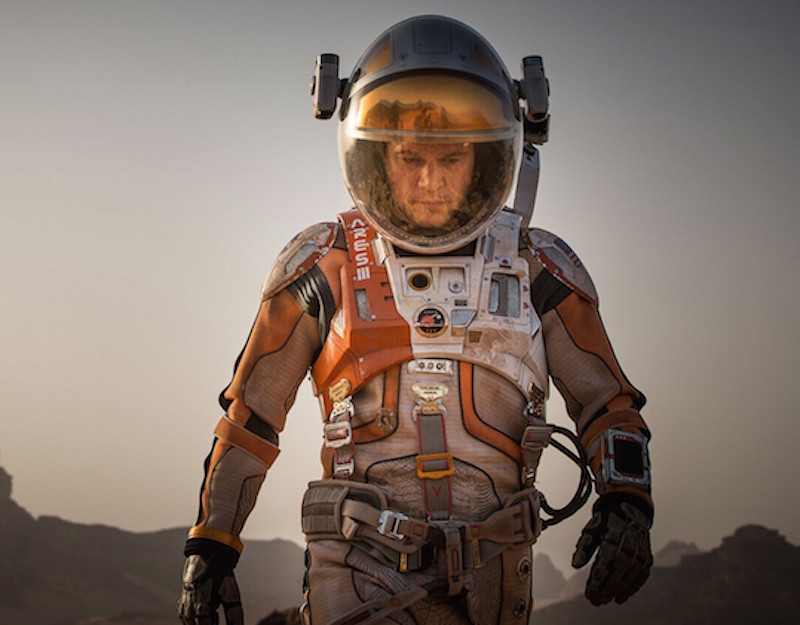 Matt Damon stars as astronaut Mark Watney in the space thriller The Martian. The Martian has been nominated for six Oscars.

Going to Mars is an unthinkable proposition for all of mankind. Getting stuck on the reddish-brown planet is even more inconceivable. The Oscar-nominated film “The Martian,” directed by Ridley Scott, tells the thrilling story of a man who gets stuck on Mars and fights to survive against all odds.

The film is based on a novel by author Andy Weir, and follows the story of an astronaut, Mark Watney (Matt Damon), who is mistakenly left on Mars by his team following a bad storm. Due to limited supplies, Watney has to use his background in botany to find a way to grow food on the desolate planet and survive until National Aeronautics and Space Administration (NASA) and his team can rescue him. This film takes the notion of man versus nature to the next level.

Academy Award-winning actor Matt Damon leads an all-star cast including big industry names like Jeff Daniels, Michael Pena, Kristen Wiig, Chiwetel Ejiofor, Jessica Chastain and Sean Bean. Damon does an exceptional job of adopting the character of Watney, a desperate but cool-headed man. He also does a phenomenal job conveying Watney’s loneliness, which is depicted in one of the first scenes where Watney stirs back to consciousness after the disaster only to realize he has to survive on his own. He also displays a multitude of emotions throughout the film, intertwining well-timed humor and creativity in an extremely unfortunate situation.

Despite the lack of a human villain, the film’s plot is quite gripping due to Damon’s outstanding portrayal of a man trying to brave the unknown elements and a script that balances timely comedy and action. The supporting cast also does a fine job in complementing Damon as Daniels, Wiig, Bean, Chastain and Ejiofor all step up to create an fresh alternative view of Watney’s struggle from NASA Headquarters on Earth. Actor Danny Glover, also known as Childish Gambino under his rap name, also makes a cameo in the film, which is an exciting sight for his musical fans.

One of the film’s main strength is in its visual effects, something that the film industry which has been recognized and therefore nominated the movie for the Oscar category of Best Visual Effects. Amazing landscape shots by Scott not only highlight the loneliness that Watney experiences on the planet, but also the haunting beauty of the Red Planet.

“The Martian” should be lauded for the balance it has between visual effects and scientific accuracy, specifically when it comes to the setting. To faithfully recreate the planet Mars, British visual effects company, Framestone, worked with NASA to make sure that specific features, such as the sky and terrain, were as realistic as possible. Scott also worked meticulously to make sure that the film accurately represented what could happen in real life. For example, the main plot line regarding Watney’s attempt to grow food on the planet was approved by real life experts like astrophysicist Michael Shara who, when speaking to the New York Post, said, “We could probably grow something on Mars.” Despite minor scientific accuracy errors, like the exaggerated effects of the wind storm that begins the film, Scott does an applaudable job that will please both moviegoers who are looking forward to the thrilling story and those who are looking forward to the science.

“The Martian” is a thrilling story worthy of its seven nominations. However, while it should be competitive in many of the categories, the most deserving and most likely award for “The Martian” should be in the Visual Effects category, a category won by last year’s space drama “Interstellar.”

“The Martian” is one of the newer editions of a series of space thrillers, following the recent blockbusters “Interstellar” and “Gravity.” However, “The Martian” distinguishes itself from both of the films as it is more engaging than “Gravity” but less emotional – and less bizarre – than “Interstellar.” Overall, it is a captivating movie and a must-watch for all, especially science aficionados.

PG-13 (for some strong language, injury images, and brief nudity)