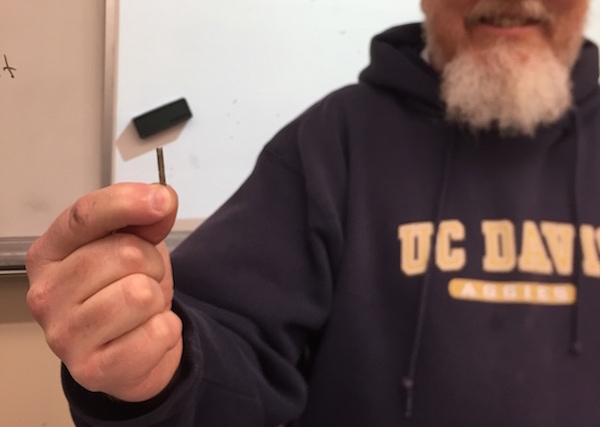 The Palo Alto High School fire alarm went off due to a science classroom demonstration today during 7th period, according to Assistant Principal Jerry Berkson.

According to Berkson, room 1704 set off the alarm, the classroom of chemistry teacher Ron Bowditch.

“Mr. Bowditch says that he lit a small piece of magnesium and the alarm went off,” Berkson said. “Whether it was [caused by] that or not, the control panel said that it was from 1704. We called maintenance just to let them know what happened, and if there is something to look into, they will look into it.”

According to Bowditch, he had been performing a simple experiment, in which a small strip of magnesium is set on fire so students can observe a reaction, a demonstration he says he has performed many times in the past.

“That little tiny piece of magnesium set off the alarm, which we have ignited many times in this class,” Bowditch said. “I’m not sure how it set it off, but it did. I knew it was me because the second I lit it, the fire alarm went off.”

Students evacuated from their classrooms to the football field in the middle of 7th period, disrupting class lessons, tests and other activities. Junior Jackson Kienitz is one of many students to have class plans delayed due to the fire alarm, though the activity was not pertinent to his learning.

“I was in theater class when the fire alarm went off, and we were supposed to be performing graded scenes,” Kienitz said. “However, with the alarm, we weren’t able to perform all the scenes, forcing us to reschedule class activities. Others have certainly not been as lucky.”