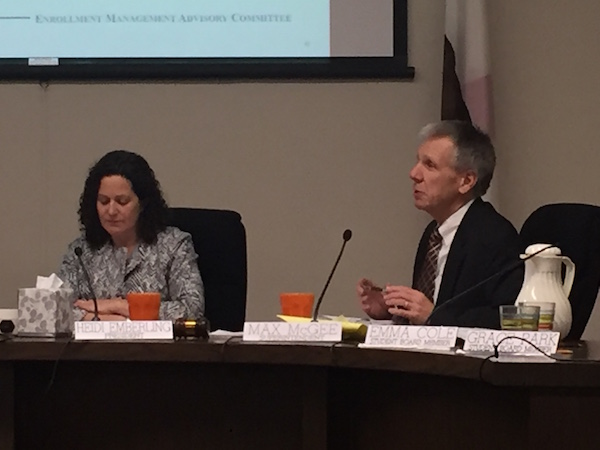 The Palo Alto Unified School District Board of Education took a stance against the creation of a third high school at Cubberley Community Center during the school board meeting on Jan. 26.

The board discussed several proposals set forth by the Enrollment Management Advisory Committee. Among these was the proposal to create a new high school at the Cubberley Community Center, advocated for by PAUSD Superintendent Max McGee. Despite a more favorable outlook for the proposal in previous board meetings, after further discussion, school board members expressed both hesitation and opposition to the creation of a new high school.

“We need to put millions of dollars behind helping ideas that have already been formed,” board member Melissa Baten Caswell said.

Despite a majority dissent from the board during the meeting, McGee remained loyal to the ideal of creating a new high school.

“I think there are some bigger issues [involving Cubberley] we need to discuss before dismissing a new high school,” McGee said.

Board members Ken Dauber and Terry Godfrey echoed Caswell’s opposition to the new high school at Cubberley, which currently serves many community functions. In contrast, board members Heidi Emberling and Camille Townsend expressed support for the creation of a subsequent task force to investigate the idea further.

“A third high school is important,” Townsend said. “I don’t believe in experimenting. I do, however, believe in choice programs. I don’t see a whole-scale changing of our schools.”

Distributing the responsibilities of the potential task force and allowing the staff of the already existing high schools to conduct their own reforms would serve the district much better, according to Caswell and Godfrey. Caswell recognized the community’s interest in new schools, though emphasized that they were not a current necessity for the district.

“I feel the need to parse things as well,” Caswell said. “Let’s first decide if we want these schools. I personally don’t feel we need new schools, we want them.”

According to Caswell, City of Palo Alto officials also need to take part in the decision to redesign Cubberley’s use.

“How we use Cubberley needs to be in collaboration with the city,” Caswell said.

Dauber supported the improvement of current schools, pointing out the need for programs that promote the social and emotional well-being of PAUSD students.

“It would be helpful to factor processes into different groups with different focuses,” Dauber said. “I appreciate the work that’s gone on here because for me what’s really surfaced is this really strong desire for the improvement of our schools.”

The school board is set to officially vote on the proposal for a new high school at Cubberley on Tuesday, Feb. 9.