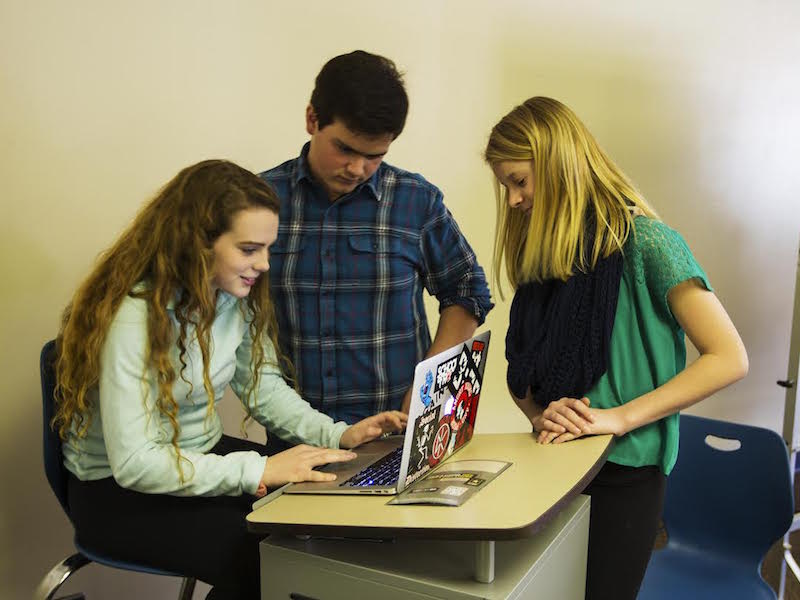 Sophomores Sam Guernsey, and Michaela Fogarty work on a project in Social Justice Pathway. According to the Palo Alto High School course catalog, "The Social Justice Pathway is a three-year program featuring self-direction and project-based learning in an interdisciplinary model rooted in community action and collaboration." Photo by Cooper Lou.

Anticipating an influx in the number of students enrolled in the district, the Palo Alto Unified School District Board of Education has been contemplating a series of proposals to build new schools to accommodate a larger student population. At the school board meeting on Jan. 6, the Enrollment and Management Advisory Committee, created to conduct research on school sizes and overcrowding, recommended further exploration of five different proposals, one of which calls for building a new high school that emphasizes project-based learning at the Cubberley Community Center. While we appreciate the effort that has gone into researching solutions to the problem, we believe that the district should not adopt the plan to transform Cubberley into an “innovative school” that will benefit only a relative few. Instead, it ought to focus its attention on expanding project-based learning opportunities at existing high schools.

Project-based learning is a hands-on classroom approach in which students actively explore real-world problems in the form of research, projects and presentations. Increased access to project-based learning would be a welcome addition to Palo Alto schools, but the more pressing issue is overcrowding, and the board should be directing its time and resources accordingly. All of the five EMAC recommendations included a provision to build another school, but not one suggested focusing on expanding the physical capacity of Gunn and Palo Alto High School or hiring more instructors. The reality is that district funding is finite, and the millions of dollars of annual operational costs for the proposed high school would best be spent improving the current high schools. In fact, the city has already taken steps to increase funds for existing schools — last year, Palo Alto passed Measure A, which established a parcel tax. The revenue will be used to hire more teachers and keep class sizes small, which is a path we should continue to take.

Furthermore, several problems will arise if Cubberley is to be a transformed into an innovative school — first and foremost is the issue of funding. Providing students at the new school with the smaller class sizes and breadth of course offerings recommended by the EMAC will require spending more dollars per student, which is in direct conflict with Board Policy 6171.

“We have a commitment in the school board for equal funding for students across each of our schools,” said board member Ken Dauber, who agrees that the district should focus on improving the current schools, rather than building another one, in an interview with The Paly Voice. “So it’s not possible for us to spend more money per student. The alternative that I have heard is using private funding to make up the difference and supplement the spending so that we’re not spending more public dollars per student. This is also not possible under our current policies, because we don’t want to create a fundraising arms race between schools where they raise money for their own students, more so than other schools, creating inequity.”

Even if the proposal could be modified so that the costs of the new school are in accordance with Board Policy 6171, which is improbable, money and time would still be better directed toward solving the numerous other pressing problems in the district, like Gunn’s ineffective advisory system, oversized classes, limited access to project-based learning and the achievement gap — the discrepancy in academic performance between socio-economically advantaged and disadvantaged students. Overcrowding is certainly an issue, but it is not the only one. The district needs to prioritize.

Although it may not seem so, the opening of a new high school with the lottery system could create a socio-economic inequality that we see in the district’s other lottery schools, Ohlone Elementary and Hoover Elementary Schools. On average, 8.95% of students in the district’s elementary schools are socio-economically disadvantaged, according to the most recent School Accountability Report Cards, compared to the significantly lower 3.5% at Ohlone, and 5.1% at Hoover. A lottery system theoretically ensures equal opportunity for all students, but realistically speaking, current and past trends show that less socio-economically disadvantaged students will apply than what should be considered equal. The district should avoid pursuing a project that could potentially exacerbate the achievement gap.

Additionally, the proposed high school would be able to hold about 400-600 students, which, considering the amount of money that would have to be spent, is a negligible dent in the projected maximum of 4100 high school students districtwide. Since the school would be so much smaller than both Paly and Gunn, enrollment would likely have to be determined through a lottery system. It seems contrary to the goals of the district to spend disproportionate amounts of money on a venture that only stands to benefit a select few.

Building a new high school entirely is impractical at this point in time, but it is possible that in the next several years, the increase in student population necessitates opening another campus. If the district goes down this path, the new school should be similar to Paly and Gunn in regards to its structure and course offerings, rather than an exclusively project-based learning school.

Proponents for the new school argue that many students feel disconnected from their learning, and are looking for a more personal education experience which can be provided at a new school. Although it is true that 5% of students at Paly and 9% of students at Gunn have little to no engagement in learning according to a survey by the school board in cooperation with Stanford, it would be significantly more cost efficient to create more non-traditional, project-based learning opportunities at the current schools. The district can explore creating additional programs similar to the Social Justice Pathway or the Sports Career Pathway that provide students with a more personalized learning experience, while increasing innovative educational opportunities for all students. At the same time, creating more of such pathways would draw students out of traditional classes, and effectively lessen class sizes.

We should be directing our time and energy toward enhancing the learning experience for the entire student body, rather than getting swept up in the novelty of a specialty school that will serve only a small sector of the population.