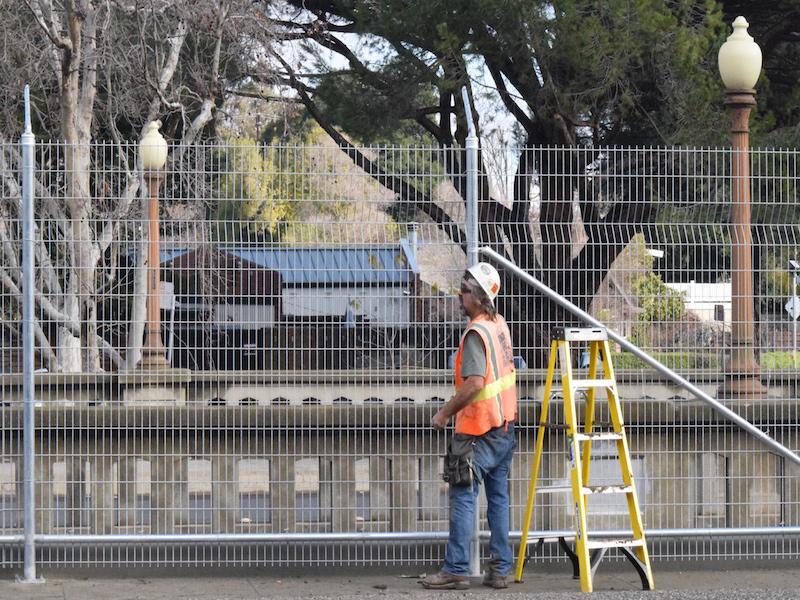 Caltrain, the commuter rail that runs from San Francisco to San Jose, is undertaking a project in collaboration with the City of Palo Alto to further restrict access to the train tracks by installing new fencing along both sides of the rail in Palo Alto.

The new fencing is a significant improvement from the previous protection from the rail, according to Palo Alto Unified School District Supt. Max McGee.

“It [the fence] runs along the whole sides of the tracks,” McGee said. “Some of the fencing had been up before, and it was already secure, but they took out vegetation and this other fence that was frankly easy to climb.”

According to McGee, the improvement to fencing along the tracks is an effort to address the means by which multiple students have died by suicide in recent years. The fence should serve as a physical deterrent to gaining access to the tracks, but also as a symbol of the value that the community holds in its members lives, McGee said.

“It is a constant reminder of how important the city, the schools, the parents, the students consider each other’s lives,” McGee said. “It’s a very positive reminder that you [the students] matter so deeply to us. If someone has this impulse to run onto the train tracks or to hop the fence, it will make it much more difficult. Sometimes, that little bit of delay is enough to make someone think ‘Well, at least I’m going to call someone first.’”

Paly parent Lauren Barley was the first to thoroughly advocate for means restriction in Palo Alto, the limiting of access to the way by which the most well-known suicides have been committed in this community, following the first student suicide of the 2014-15 cluster of suicides within the Palo Alto community, according to McGee.

Barley, who knows the family of the girl from Woodside that died by suicide in 2014, was moved by how the community came together in the wake of Byron’s death, the Paly sophomore who committed suicide in March, 2015.

“I attended the two parent events that Paly held and was struck by how these deaths had such an extended and deep impact on administrators and students, even those who did not know Byron directly,” Barley said.

Barley researched “means restriction,” which, in the context of Palo Alto, specifically focused on railroad access. She presented her findings to Caltrain along with McGee and city officials.

“I was driven by the belief that reducing access to Caltrain in Palo Alto would reduce and prevent deaths by suicide,” Barley said.

According to McGee, the City of Palo Alto officials also assumed a great role in pursuing the effort to improve fencing and sensor technology along the Caltrain railroad by participating in meetings and advocating for the project.

“They [city officials] really took the lead in these meetings and persisted with Caltrain,” McGee said. “It [the project] was funded by Caltrain and the city. They’re also looking at putting in sensors to sense if someone does get over or around the fence at a crossing.”

Restricting the means by which someone may harm themselves serves as way to force them to slow down and does not allow them to act as impulsively as they might otherwise, according to McGee.

“If you have to climb, or get a ladder, or walk across one crossing or the other, that two to three minutes can make someone reconsider and think, ‘What am I doing?’” McGee said.