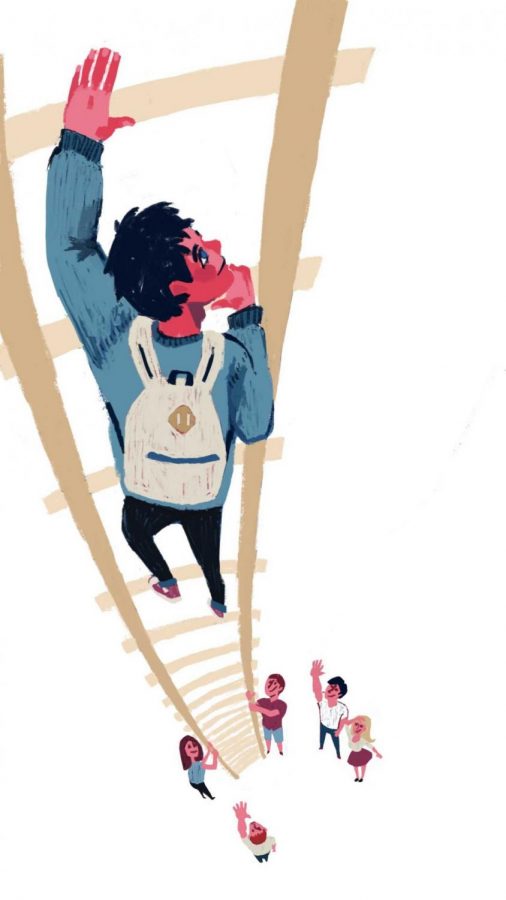 Year after year, the Palo Alto Unified School District is lauded for producing high-achieving students — average test scores are consistently high, excellence in extracurriculars is commonplace and college matriculation is impressive. But accompanying the district’s apparent success is a stream of criticism from disgruntled parents, students and educators, as well as national media.

Nothing has ignited more vehement condemnation of the schools than the three student deaths by suicide this school year. Everything becomes more urgent, and the weaknesses of the district appear even more magnified in the wake of such tragedies.

People found all kinds of outlets to express their opinions on the schools’ failure to mitigate student stress, including local newspapers, school board meetings, forums and social media. In an article on Palo Alto Online, guest writer and Palo Alto High School junior Carolyn Walworth, the school’s appointed student representative to the district Board of Education, describes her personal experiences and opinion about the community’s actions surrounding the issue. Palo Alto’s suicide problem was even addressed in The New York Times — not once, but twice. Frank Bruni writes about the apparent deterioration of mental health in high-performing communities, using Palo Alto as the case study, in his Op-ed, “Best, Brightest — and Saddest?” while Matt Richtel tackles the issue of academic pressure at Paly and Gunn High School in his feature, “Push, Don’t Crush, the Students.” Bruni and Richter quote Walworth as the sole youth voice in both their articles, therefore implying that her perspective is somehow representative of the entire student body.

All three seem to have arrived at the same conclusion: Students simply can’t escape the ultra-competitive atmosphere of Palo Alto, and many get sucked in so deep that they come to believe their entire livelihood is dependent on which college they gain admission to.

Walworth, Bruni and Richtel bring up fair points — no one can deny that competition and stress are pervasive in Palo Alto schools.  We know that there are students who have to deal with unhealthy amounts of pressure and may feel obliged to meet unattainably high expectations.

But this is not everyone. The perceived image of the typical Palo Alto student as completely focused on academic success and nothing else, perpetuated by these writers, is overgeneralized. And these absurdly broad accusations indicate a fundamental lack of understanding about the problem.

In their attempt to analyze the problem at hand, some observers end up ascribing characteristics of a select few to the entire population of Palo Alto. Not every student takes too many rigorous classes or has a plethora of extracurricular activities, and of those who do, the chief intention is not always to get into a prestigious university. Many of us embark on these endeavours because of a genuine desire to learn, to invent, to improve ourselves and our communities. And with so many opportunities to engage in these interests around us, in part because our schools are so very good at providing them, why not take them on? It’s not a crime to show passion in wide-ranging disciplines like the visual arts, science, athletics, music, politics, writing and theater, just to name a few. Regardless of what some may try to convey, we are passionate about and proud of our pursuits.

We would like to dispel the idea that students being stressed means that students are always focused on academic success. Just because people admit to having some anxiety in their lives does not mean they are soulless automatons in rabid pursuit of an Ivy League degree.

In addition to implying that Palo Altans are overly success-focused, Richtel in particular insinuates that all of the suicides were caused solely by academic pressure. But each one was caused by a different set of circumstances, and each one should be treated as an individual tragedy. For us to achieve our goal of making schools a healthy and enriching environment for everyone, we need community members and outside observers alike to avoid stereotyping or making blanket statements.

We believe that people who blame certain groups for the current problems that exist within our school district — administration for making classes too difficult, parents for pressuring their children to succeed, students for their excessive competitiveness, etc. — are counterproductive. We appreciate that people have stepped forward to share their perspectives on mental health, and it’s nice to know that our community has a vested interest in this problem, but anyone who faults any particular group for this vastly convoluted issue is being unfair and certainly not helpful.

The serious problems within the education system should be recognized, but we also need to maintain a positive outlook to avoid a sense of hopelessness that is not conducive to productivity. We realize that the negative comments stem from frustration and sadness about student deaths, but we still want to encourage those who have made abrasive remarks to offer support and constructive criticism rather than tear others down.

In all our dialogue about the issue of student pressure, we often forget that educators in the community have very much responded to the community’s cries for change — easing homework loads and improving counseling services are two of many changes being instated in the schools. We applaud the school board, educators, students and parents for coming together and enacting these measures. We know how difficult it is to make broad, sweeping reforms that are effective for the general populace.

There’s no panacea, no one ordinance, that will make all feelings of anxiety and despair disappear completely. But with constructive feedback from students, parents and educators, and a city-wide willingness to listen, we will take steps toward making the school environment more inviting and accommodating for everyone.

We Palo Altans are defined by more than just our flaws. We are lively, diverse, compassionate and innovative, and deserve to be viewed as such.

Editor’s note: The author of “Push, Don’t Crush, the Students” is Matt Richtel, not as previously spelled.