Where is everyone? Students opt out of Smarter Balanced test 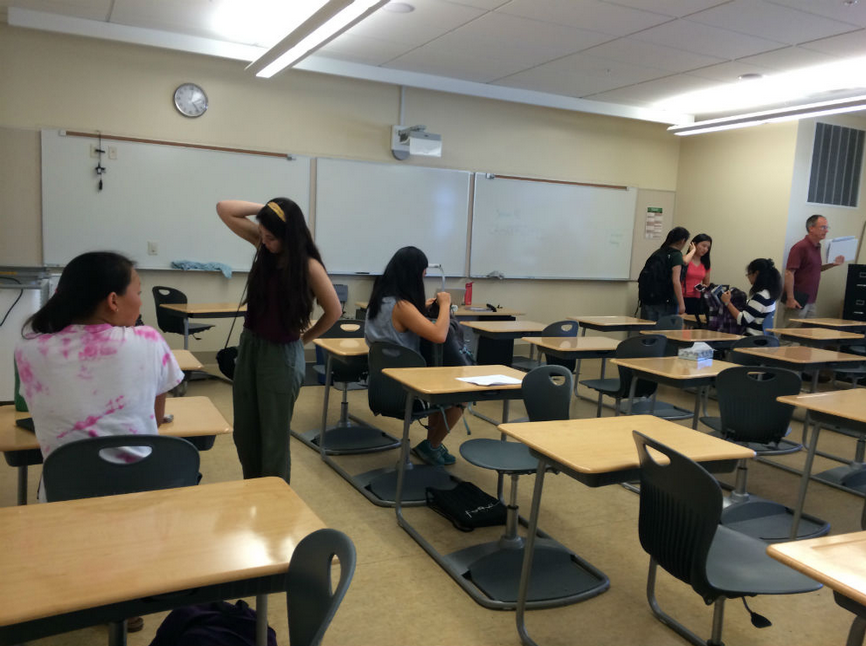 Students pack up in Room 856 after taking the Smarter Balanced test this afternoon. Of the 30 juniors scheduled to take the test in the room, only 15 were present. Photo by Jeanette Wong.

According to California Education Code §60615, parents are allowed to let their children opt out of California standardized tests, such as the Smarter Balanced test, by simply signing a form. However, Paulson said students who were not previously excused from the test are expected to retake the test at a to-be-determined date.

“Our participation rate was expected to be somewhere around 50 percent — which is disappointing,” Principal Kim Diorio said. “We were hoping for a larger turnout, but we certainly understand that parents and students have a right to opt out of these kinds of tests. We’re seeing a trend across the nation of parents and students exercising that right.”

Given the small number of test takers, the data collected may not accurately reflect the proficiency of the junior class on the subjects that were tested. With less than 50 percent of students taking the Smarter Balanced test, the data is statistically insignificant, which does not accurately give the school benchmark information, Diorio said.

Because it is Paly’s first year for implementing the Smarter Balanced test, the school and the school district will not be affected by the scores in any way, according to Diorio. However, Smarter Balanced scores next year will count towards the school’s ‘score,’ which will be a reconstituted version of the Academic Performance Index score, Paulson said. Thus, Paly’s score next year will depend on test participation.

“Typically, it’s around 95 percent of the students that they [the CA Dept. of Education] want you [the school] to test,” Paulson said. “Obviously, today we didn’t get there. We need most kids to participate so we can get an accurate score.”

Despite how test participation did not fulfill ideal circumstances, the school benefitted from the test administered today, according to Diorio.

“It’s a good practice run,” Diorio said. “I think teachers will learn a lot from proctoring it and administering it. Having seen the questions and getting a better sense of what it’s asking students, there’s definitely value in it.”

The test is divided into two sections, with a 10-minute break in between the sections. Some changes were made today regarding the scheduled breaks during the test.

Students were given two hours to complete around five short answer questions, according to junior Joseph Kao. Kao says many students completed the first section of the test in approximately 15 to 30 minutes. Because the test took a shorter amount of time than anticipated, Diorio and Paulson released students about an hour before their scheduled break time.

“We did not expect that [the length of the test], which is why we made the executive decision to let you [the students] out,” Diorio said. “I walked around to five or six classrooms and I noticed that everybody was done. I found Mr. Paulson, and we decided to make some adjustments and give the students a break. We don’t want you sitting there with an hour, or hour and a half, with nothing to do. That’s not fair to the kids who did show up.”

Public school participation in the Smarter Balanced test is encouraged by the California Department of Education, according to Paulson.

“As a public school, we need to offer the tests, and we encourage full participation,” Diorio said. “I’m very thankful for all the kids that are here. It will help us get some good data.”

Although the Smarter Balanced test does not help with admission to college, it can potentially save students time by acting as a placement test for colleges in the California State University system and community college system.

Many students did not show up to take the test because they felt it had no meaningful purpose, according to junior Nick Guardino.

“I think a lot of people didn’t come because it [the Smarter Balanced test] doesn’t necessarily affect their future,” Guardino said. “They probably didn’t think it was worth their time. … It’s monotonous and seems irrelevant.”