A self-driving car parks in the Google parking lot. “We’ve been working on that [designing our own cars] for about the last two years,” Waydo said. “It allows us to customize both what the sensor sees and all the computing.” Photo by Jeanette Wong.

The fact that cars have revolutionized the world is indisputable. In modern times, cars can be a source of frustration, pleasure, and sometimes even fear. However, the feelings that people have towards cars could be completely changed quite soon — maybe sooner than most expect. Local tech giant Google, among other innovators, is working on an ambitious endeavor to transform the future of transportation: cars that can drive themselves. As part of the recent Career Month Speakers Series, Google Vehicle Development Lead Jaime Waydo came to Palo Alto High School to give a presentation and show off her team’s project — a self-driving car.

Waydo shared information on how the Self-Driving Car Project is developing and the future implications of these driverless cars.

“The leading cause of death from people [of ages from] three to 30 in the United States is motor vehicle fatalities,” Waydo said. “Ninety-two percent of those fatalities are from human error, meaning that the driver of the car has done something wrong. That’s just tragic. So, if you take the human out of the car, you can create a driver that’s never tired, a driver that never gets angry, a driver that’s just always making good decisions, and make that number go away. That’s really the goal of what we’re working on.”

Google has been working on developing autonomous cars since 2009, according to Waydo. Since then, this project has expanded to a much larger scale. Sensors on either side of the car can recognize people, cars, signs and traffic lights, according to Waydo. Photo by Jeanette Wong.

“We’re [Google is] learning a lot about self-driving technology — not just on the freeway, which you saw us doing early on [as early as Jan. 2010, as evidenced by this video], but also in more city street environments,” Waydo said. “That’s what why you see the Lexus driving around Mountain View a lot. We’re letting the cars drive autonomously — with our safety drivers in them — and figuring out all the new challenges that can happen when you’re driving in an urban environment like that.”

According to Waydo, the different environments pose different challenges for the design team. On the freeway, although the cars are moving at high speeds and the autonomous car needs to be able to respond quickly, all the cars are moving at more or less the same speed and direction. However, on city streets, there is a lot more randomness involved and other factors that need to be considered. Pedestrians, cyclists, animals all contribute to the variables cars encounter in a city.

Google is not alone in this undertaking. As technology continues to advance, more and more companies are looking to develop innovative ways to aid drivers on the road. Several major car manufacturers such as Audi, Toyota and Ford are in the stages of developing autonomous cars of their own, and Mercedes-Benz’s most recent model features “Steering Assist,” in which sensors on the car can help “maintain the desired distance from another vehicle in front,” according to its website. A sensor on the roof of the car spins in place, constantly scanning the surroundings. Photo by Jeanette Wong.

“We’re all trying to do the same thing: make the roads a safer place,” Waydo said. “The secondary goal is to make transportation more efficient, and hopefully, with all of us working on that, there’s a great environment to help foster creativity and make those challenges more solvable.”

Autonomous cars could revolutionize the world as we know it and greatly diminish fatal accidents and road rage, according to Waydo.

The Paly Voice asked members of the Paly community to share their opinions on self-driving cars. Graphic by Emily Hwang. 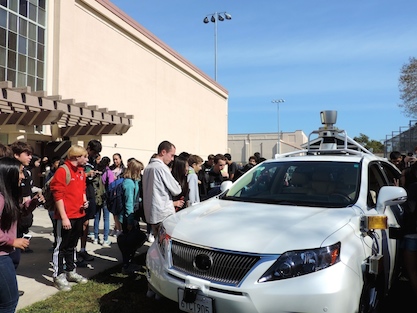 Paly students surround and observe a Google self-driving car. Jamie Waydo came to speak at Paly as part of the Career Month Speaker Series on March 9. Photo by Adrienne Kwok.

According to Waydo, the world of self-driving cars is fairly new, so there are still a lot of logistical problems that need to be worked out. It is still unclear how traffic laws will change to adapt to this new technology, Waydo says.

“It’s a new frontier of sorts and typically, when you see new frontiers, you see the world adapting and learning what that means to society,” Waydo said. “I think that’s a place that we’re just now starting to embark on.”

Waydo encourages people to ignore cost and other details for now, and instead focus on the significant problems that self-driving cars could potentially solve.

“Everything we do is making the world better and safer, and that’s what it’s about,” Waydo said.