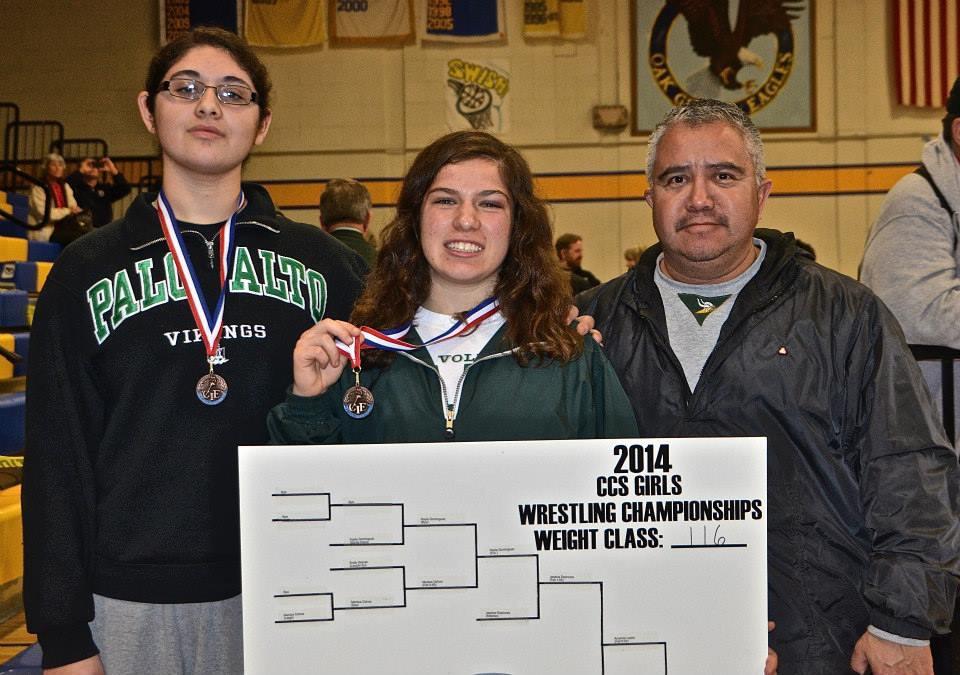 Nationwide, around 9,000 high school girls wrestled last year, which is nearly nine times more than from a decade earlier, according to the National Wrestling Coaches Association. Although girls’ wrestling is growing in numbers, only about three percent of high school wrestlers are girls. Sophomore Sara Aguilar and senior Alexa Austin are the two female members of the Palo Alto High School wrestling team. The girls compete this weekend at the California Interscholastic Federation girls’ state tournament in Visalia. The Paly Voice sat down with the two female wrestlers to ask them about their wrestling experiences at Paly.

The Paly Voice: How did you get interested in wrestling?

Sara Aguilar: Well, I started because at JLS (Jane Lathrop Stanford Middle School), I had Physical Education with Coach Braumon Creighton. He asked me if I wanted to do it, and I just did because it seemed fun.

Alexa Austin: For me, I also was in Mr. Creighton’s class, and he wanted me to join. I thought I was too cool for wrestling, so I didn’t. I actually played basketball freshmen year. Then, my mom and I started going to church, and my youth pastor was a wrestler, and he told me to join. I tried it just to try it and liked it, so I stayed.

TPV: What would you suggest for other girls interested in wrestling?

SA: Don’t be afraid to try out even if you’re the only girl. It is really fun, and you learn a lot. Mentally and physically, you grow.

AA: It really is a fun sport. It might seem scary and intimidating, but it’s a really welcoming team. Once you come out, we just like embrace each other.

TPV: How much of a time commitment is it?

AA: Practice is after school every day until 5:30 or 6 p.m. We don’t really have any morning practices. Tournaments are on the weekends.

TPV: How do you get on the team?

SA: It’s not a cut sport, so that means anyone can try out.

AA: We start conditioning in September. Our first tournament is in December, so we just train for a few months.

SA: Being aggressive (laughs). It’s just fun. You get obsessed with it sometimes.

AA: I like competing. In a lot of tournaments, you compete with each other, but once the match is over, you become close friends. A lot of my toughest competitors, I train with a lot in the off season, and we are really close.

TPV: What competitions are big for the girls’ team?

AA: A big one for the girls is Napa. Before girls’ wrestling was part of the school, that was the state tournament, so we just keep going to it. We usually go to the Hollister Baler Bash, which is very fun. Its a country tournament with hay bales and stuff like that. We always go to CSS (Central Coast Section) and State. We play in the dual meets, which is our school versus another school. Sometimes we do that in the league finals.

SA: We also go to the boys’ tournaments.

TPV: Are there more girl wrestlers now than before?

AA: Girls’ wrestling is definitely growing and getting bigger. CCS is a lot bigger this year than it was last year, and it’s been growing the three years we have been going. It grows – people get invited to come and just try it out.

The girls will attend the weekend-long CIF tournament this weekend at the Visalia Convention Center in Visalia.