An issue is dividing the nation. It is not a new issue, but recent events have shed more light on it. And Wednesday may mark the first time in years that Washington proposes to do something about this issue: gun control. 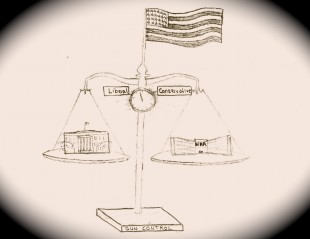 From the shooting in Columbine in 1999 to the recent tragedy at Sandy Hook, atrocities involving guns have occurred time and time again. And this is why The Paly Voice encourages legislators in the coming months to pursue new regulations on guns to prevent future shootings and save lives.

The first measure we believe must be taken is a renewal of the federal assault weapons ban that expired in September of 2004. The Paly Voice accepts the use of firearms for hunting and self-defense purposes. However, assault weapons were created to kill humans, not animals, and they are certainly unnecessary for fending off an attacker. Being extremely destructive, assault weapons are used by the military and do not have any more purpose in the hands of civilians than machine guns do.

Assault weapons are designed to kill in large numbers — the perfect tool for these increasingly, and disturbingly, common mass shootings, as was in the case of the Sandy Hook school shooting. Assault weapons need to be the first to go. The name says it all.

Along with an assault weapons ban, Congress should ban high capacity magazines. We believe holding more than 10 bullets in a magazine is unnecessary — the main purpose it serves is more destruction.

While addressing the types of weapons in circulation is crucial, we believe that increased background and mental health screening and treatment is equally important. As the National Rifle Association loves to chant — guns don’t kill, people do. Guns do help a lot, but the underlying point is something to be considered. We believe just banning certain weapons is not enough.

Background checks need to be not only stricter but also more uniform. Barriers need to be put in place to restrict gun ownership that are consistent across the entire country, instead of varying from state to state. Guns are lethal weapons in the hands of anyone. The last thing this country needs is people without proper training or with misguided intentions gaining access to weapons without having passed appropriate tests and background approvals. Gun ownership should not be treated lightly — the repercussions can be serious.

Through these changes of policy, or some combination of them, we hope that future mass shootings can be avoided, or at least the consequences dampened. If these measures are enough to save one life, it will be worth it.